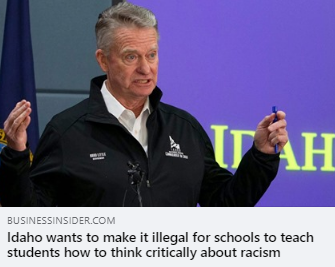 In Utah, A tour guide discovered the words “white power” on “The Birthing Scene,” a panel on a slab covered with Native American art. The Utah Bureau of Land Management is offering a reward in the case. The art dates from the Anasazi period almost 2,000 years ago.

In Idaho, a bill that would ban anti-racism teaching based on critical race theory (CRT) in schools is awaiting Gov. Brad Little’s signature. According to the American Bar Association, “CRT recognizes that racism is not a bygone relic of the past. Instead, it acknowledges that the legacy of slavery, segregation, and the imposition of second-class citizenship on Black Americans and other people of color continue to permeate the social fabric of this nation.”

SEE: Idaho wants to make it illegal for schools to teach students how to think critically about racism

“Growing hate targeting minority communities nationwide clearly shows the need for all Americans to push back against white supremacy, and to educate themselves and others about our nation’s systemic racism and how to more forward as a just and inclusive society,” said CAIR National Communications Director Ibrahim Hooper.