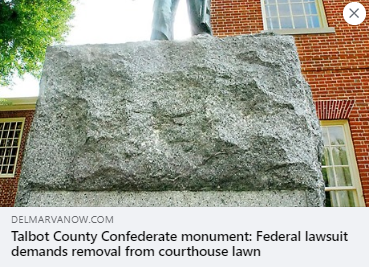 (BALTIMORE, MD, 5/6/21) – The Maryland office of the Council on American-Islamic Relations (CAIR) today offered support for a lawsuit seeking the removal of a Confederate monument from a courthouse lawn on that state’s Eastern Shore.

The lawsuit, filed on behalf of the Maryland Office of the Public Defender, assistant public defender for Talbot County Kisha Petticolas, the Talbot County Branch of the NAACP and branch president Richard Potter, claims that a statue glorifying the Confederacy on the lawn outside the county courthouse in Easton, Md., is both unconstitutional and illegal under federal and state laws.

According to according to the ACLU of Maryland, which is representing the defendants alongside the Washington, D.C. law firm Crowell & Moring LLP, the monument is the last Confederate statue on public land in the state.

“We applaud this legal effort to remove the stain of the Confederacy from our state,” said CAIR’s Maryland Director Zainab Chaudry. “This legal initiative deserves the support all those in our state who value justice and reject systemic anti-Black racism and white supremacy.”

Earlier this year, welcomed state lawmakers’ final move yesterday to repeal “Maryland, My Maryland” – the controversial, pro-Confederacy tune adopted as the state song in 1939 that constituents have protested for decades. CAIR announced its support for repealing the state song earlier this year.