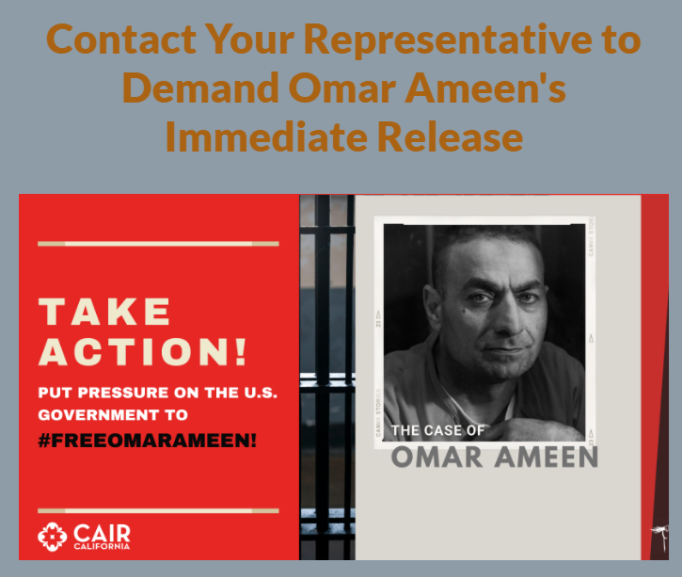 (SACRAMENTO, CALIFORNIA – 9/23/2021) – Just yesterday, CAIR-SV/CC filed a motion to unseal an important piece of evidence in the case of Sacramento area resident, father of four, and Iraqi refugee Omar Ameen.

On August 15, 2018, Ameen was searched and arrested based on that sealed exhibit, and nearly three years later U.S. Magistrate Judge Brennan relied on that same document in his Order denying Ameen’s extradition to the Republic of Iraq for the crime of murder of an Iraqi police officer.

According to Judge Brennan, the government’s case was “dubious;” its witnesses were “unreliable;” and the narrative presented made “little sense.” In other words, Judge Brennan found that there was no plausible way that Omar Ameen could have committed the murder for which he stood accused. Despite that ruling, Ameen was not released and was instead taken into ICE custody.

“We have a strong interest in knowing what evidence the government relied upon in disrupting the lives of Omar and his family. Being accepted into the United States as a refugee is hard – the vetting process is extensive and takes a long time. It’s also important to note that this goes beyond Omar Ameen and the considerable harm that has been done – and is still being done – to him and his family.

“This case, which was specifically cited by the Trump Administration in their effort to gut the Refugee Program, represents just one prong in that Administration’s overtly Islamophobic agenda. The Muslim Ban was another. Given the Biden Administration has chosen to allow deportation proceedings against Omar to continue despite his exoneration, we must remain vigilant.

“This sealed exhibit was central to the Judge’s order refusing to extradite Omar Ameen. To fully understand that Order, and the actions of the Government in this case, we are asking the Court to unseal that exhibit.”

CAIR-SV/CC is an office of CAIR, the largest Muslim civil liberties and advocacy organization. Its mission is to enhance understanding of Islam, protect civil rights, promote justice, and empower American Muslims.