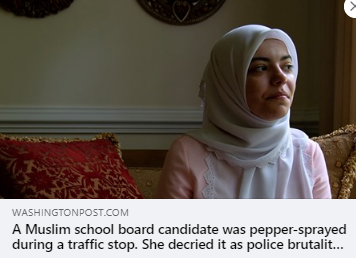 Omeish, CAIR, and coalition to launch ‘Fight for Five’ coalition for local and state reforms

(WASHINGTON, DC, 1/11/21) — On Tuesday, January 12, the Council on American-Islamic Relations (CAIR) will hold an online news conference to announce the filing of a lawsuit in federal court in Alexandria, Va., on behalf of Abrar Omeish, a Muslim woman and Fairfax County elected official who was pepper-sprayed by a Fairfax County police officer after he pulled her over for turning right at a red light.

After she was taken into custody, Abrar was forced to remove her hijab (Islamic head scarf) and photographed in violation of federal law. She is leading a coalition, called “Fight for Five,” to demand local and state reforms.

[NOTE: Last year, Fairfax County Chief of Police Edwin Roessler’s internal investigation of the use of force stated it was “improper and in violation of departmental regulations.”]

SEE ALSO: Abrar Omeish was pepper-sprayed during a traffic stop. She decried it as police brutality (Washington Post)

During Tuesday’s news conference, Omeish, her attorneys and civil rights leaders will address the media and answer questions about her lawsuit and the Fight for Five coalition.

WHAT: CAIR Files Suit on Behalf of Abrar Omeish Challenging Police Brutality and Being Stripped of Hijab by Fairfax County officers Against Will; Omeish to Launch Demands for Reform Through Fight for Five Coalition