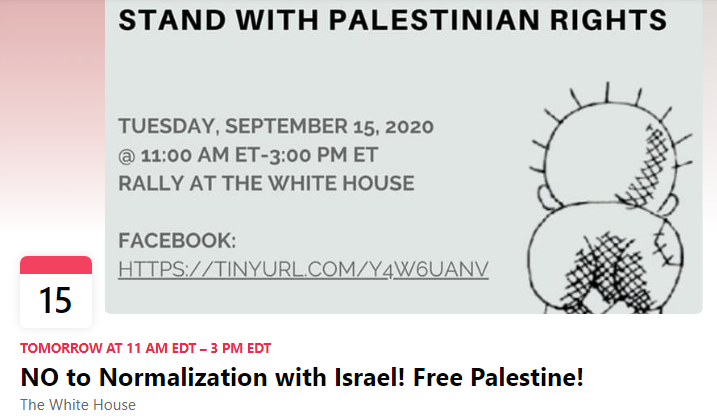 (WASHINGTON, D.C., 9/14/20) – On Tuesday, September 15, the Council on American-Islamic Relations (CAIR) will join a coalition of more than 50 organizations co-sponsoring a protest rally outside the White House in opposition to the US-brokered normalization treaty between the United Arab Emirates (UAE) and Israel. [NOTE: Participants should wear face masks and practice social distancing.]

The protest will take place on the same day and time as the treaty’s signing ceremony.

WHAT: No to Normalization with Israel! Free Palestine! Rally

The rally is being organized by Al-Awda, American Muslims for Palestine (AMP), The Palestine Right to Return Coalition, CODE PINK: Women for Peace; Daarna; Organizing for Palestine; U.S. Palestinian Council; and many other organizations.