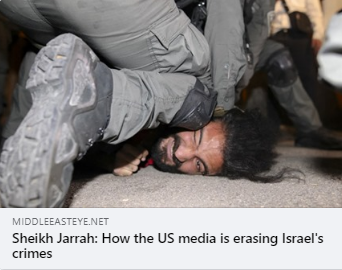 Sheikh Jarrah: How the US media is erasing Israel’s crimes

In a statement, CAIR National Executive Director Nihad Awad, whose family was ethnically-cleansed from Palestine, said:

“The Palestinian people – Muslim and Christian — are continuing their decades-long struggle to resist both ongoing ethnic cleansing and the apartheid system that has been so-named by respected international groups like Human Rights Watch. To term this resistance and the brutal Israeli response as ‘clashes’ falsely indicates a moral equivalency between the oppressor and the oppressed, between the occupier and the occupied.

“Our nation’s thought leaders and policymakers must finally give up the ‘human rights and justice everywhere – except Palestine’ attitude that has resulted in so much suffering and injustice over so many years.”