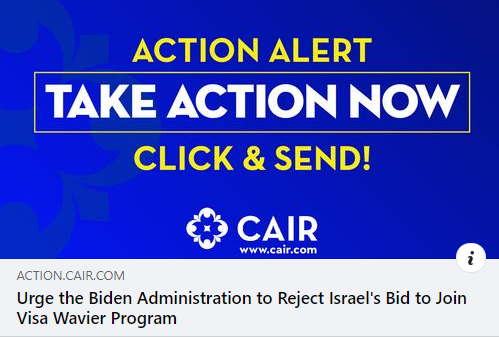 (WASHINGTON, D.C., 8/18/21) – The Council on American-Islamic Relations (CAIR) is calling on President Joe Biden and U.S. Department of Homeland Security (DHS) Secretary Alejandro Mayorkas to reject Israel Envoy to the U.S. Gilad Erdan’s request for a U.S. Visa Waiver Program deal “without a firm guarantee of reciprocal travel privileges for all Americans–including Muslim, Palestinian and Arab-American travelers who often face severe entry restrictions or outright travel bans when entering Israel– it would create an unequal system that benefits Israel while harming the United States.”

The Visa Waiver Program enables *most citizens or nationals of participating countries to travel to the United States for tourism or business for stays of 90 days or less without obtaining a visa. To join the Visa Waiver Program, the entering country must allow Americans to enter without a visa as well.

Following a meeting with Secretary Mayorkas, Erdan posted on August 16 on Facebook that he expects to see “significant progress” on a U.S. visa waiver deal.

If the Biden Administration were to add Israel to the Visa Waiver Program it would create an unequal system that does not ensure reciprocal travel privileges extended to all United States citizens traveling to Israel.

In a statement, CAIR said:

“If the Biden administration were to add Israel to the visa waiver program without a firm guarantee of reciprocal travel privileges for all Americans–including Muslims, Palestinians and Arab-American travelers who often face severe entry restrictions or outright travel bans when entering Israel — it would create an unequal system that benefits Israel while harming the United States.

“It would be unprecedented for the United States, let alone any other nation, to diminish the rights of its own citizens in order to facilitate the discriminatory practices of a foreign government.

“The U.S. Visa Waiver Program is built on reciprocity and no nation should be granted an exemption to the equal treatment of American citizens regardless of faith or ethnicity.”

Israel routinely refuses to allow Americans of Arab ethnicity or Muslim backgrounds to enter their country or the occupied territories it controls. According to the U.S. State Department’s website:

In 2013, CAIR and other American Muslim and Arab rights organizations defeated an attempt in the U.S. Senate that would have permitted Israel to join the Visa Waiver Program while keeping its discriminatory and restrictive immigration policies.

*Note: On December 18, 2015, the Visa Waiver Program Improvement and Terrorist Travel Prevention Act of 2015 became law as part of the Consolidated Appropriations Act 2016. Today, the act continues to impact travelers that are nationals of Visa Waiver Program countries who have traveled to or been present in Iran, Iraq, North Korea, Sudan, Syria, Libya, Somalia, and Yemen on or after March 1, 2011 (with some limited exceptions). The act also impacts mainly Muslim nationals of Visa Waiver Program countries who are also nationals of Iran, Iraq, North Korea, Sudan, or Syria. The act was adopted when more than half the nation’s governors declared Syrian refugees were not welcome in their states as the U.S. rejected those fleeing war and persecution in Syria. The act is viewed by many as the legal foundation for the prior administration’s now defunct Muslim travel ban. CAIR continues to urge Congress and the Biden administration to repeal this discriminatory act.