CAIR Urges Elected Officials, Media Not to Engage in Anti-Muslim Tropes or ‘Misuse’ Islamic Terms When Commenting on Afghanistan 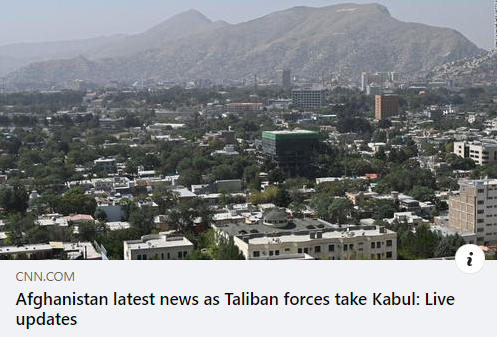 (WASHINGTON D.C., 8/16/2021) – The Council on American-Islamic Relations (CAIR), the nation’s largest Muslim civil rights and advocacy organization, today urged elected officials and media outlets not to engage in anti-Muslim tropes or misuse Islamic terms when commenting on the crisis in Afghanistan.

Yesterday, Taliban forces took Kabul and President Biden sent an additional 6,000 troops to assist in evacuating American personnel from the country. Afghan refugees are flooding into neighboring countries seeking safety from the ongoing violence and instability.

SEE: The latest on Afghanistan (CNN)

Reporters and politicians have misused Islamic terminology such as “sharia” and “jihad” when referring to the Taliban. Ill-defined hot button pejorative terms like “Islamist” and “jihadist” have also widely been used.

Over the past several days, CAIR has been watching with great concern as the situation in Afghanistan devolves following the collapse of the Afghan government, the ongoing evacuation of American personnel and a flood of Afghan refugees.

Amid these difficulties, we have been heartened by the many voices inside and outside of Congress who have called on our nation to open our doors to Afghan refugees and provide humanitarian assistance to those in need. However, we have also been concerned by those who have used recent events as an opportunity to target refugees, American Muslims and even Islam itself.

Former White House adviser Stephen Miller has claimed that welcoming Afghan refugees will harm America. A prominent reporter misconstrued chants of “God is Great” in Arabic as “Death to America.” A member of Congress has publicly and unnecessarily claimed that he and residents of his district will ensure that Islamic law never comes to America. Perhaps most glaringly, numerous reporters and politicians have used inappropriate Islamic terminology to refer to the Taliban.

If your office plans to comment on the unfolding situation in Afghanistan, we encourage you to avoid misusing sacred Islamic terms that are often misappropriated by extremists, such as “Sharia” and “jihad.”

For Muslims, the word “Sharia” represents the divine law contained in the Quran and Hadith, or sayings of the Prophet Muhammad (may peace and blessings be upon him).

The word can be translated as “the way to water.” Much like canon law for Catholics and halacha for Jews, Sharia is a source of guidance to Muslims on a wide variety of topics, from how to pray, to charitable giving, to banking, to governance in Muslim nations. Interpretations of Sharia vary, and no one should automatically describe all of the Taliban’s ideology or its behavior as “sharia,” much less the definitive manifestation of Islamic law.

Some words such as “Islamist” and “jihadist” are fictional terms with no Arabic equivalent that misconstrue Islam as a political ideology. In recent years, we have seen the term “jihadist” come to be used as if it means a person who kills people out of a religious motivation, but this is inaccurate.

“Jihad” does not mean “holy war.” Literally, jihad means to “struggle,” strive and exert effort. It is a central and broad Islamic concept that includes struggle against evil inclinations within oneself, struggle to improve the quality of life in society, struggle in the battlefield for self-defense (e.g., – having a standing army for national defense), or fighting against tyranny or oppression.

Finally, other commonly used phrases to incorrectly associate Islam with extremism, such as “radical Islam,” “radical Islamic terrorism,” and “Islamic extremism,” are loaded catch-all terms devoid of any true meaning. At times, employing these loaded terms can have the unintended effect of legitimizing the religious claims of certain groups.

“Militant group,” “laws influenced by religious and cultural traditions,” and “ultraconservative interpretation of religious law” are also examples of more neutral language that can be used without misusing Islamic terminology.

SEE: Obama Explains Why He Doesn’t Use The Term ‘Radical Islam’ For Islamic State, Al Qaeda

By avoiding the use of inaccurate or inflammatory terms, your office is using objective language that does not conflate the faith of our nation’s 8 million American Muslims and 1.5 billion Muslims around the world with the actions of the Taliban.

Right now, Congress should be focused on the bigger picture of working to ensure Afghanistan prioritizes peace, stability, and the human rights of its citizens.

One of the ways your congressional office can help now is to reach out to Afghan-Americans in your district to offer your moral and practical support, especially if anyone needs assistance rescuing their relatives from a perilous situation.

CAIR would be happy to answer any questions your office may have about these issues, or any other issue pertaining to American Muslims or Islam.