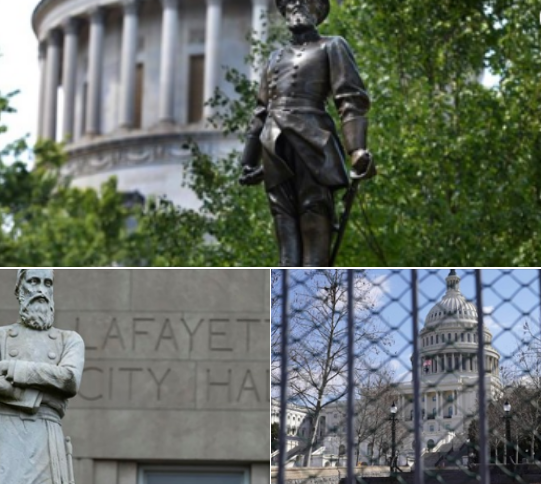 (WASHINGTON, D.C., 3/16/2021) – The Council on American-Islamic Relations (CAIR), the nation’s largest Muslim civil rights and advocacy organization, today urged lawmakers in West Virginia to reject a bill that would protect Confederate monuments in that state, supported removal of a Confederate monument in Louisiana and welcomed the suspension of a U.S. Capitol Police officer following the discovery of a notorious anti-Semitic screed.

In West Virginia, legislation (House Bill 2714) that would make it illegal to remove or relocate Confederate monuments from the state Capitol grounds and other locations is under consideration after a House of Delegates Committee advanced it on a party line vote. The bill includes protection of statues relating to “the War Between” the states.

In Lafayette, La., a court hearing on the removal of a statue of a Confederate general was delayed Monday for a sixth time. Residents filed a legal intervention in 2019 into a 1980 injunction that prohibits the removal of the statue from city property.

Fate of Alfred Mouton statue in limbo after second postponement

In Washington, D.C., a U.S. Capitol Police officer was suspended after a copy of the infamous anti-Semitic tract “Protocols of the Meetings of the Learned Elders of Zion” was found near a Capitol Hill security post.

“Those who seek to protect and promote white supremacy, anti-Semitism, racism, or any other form of bigotry must be opposed and repudiated by all Americans who value our nation’s movement toward a more just and inclusive society,” said CAIR National Communications Director Ibrahim Hooper.

Hooper noted that last week, CAIR welcomed a new initiative in Virginia that provides a standard for renaming streets honoring the Confederacy, supported a new resolution in the Tennessee House of Representatives calling racism a public health threat and condemned racist propaganda found in Maine.

He said the American Muslim community and CAIR stand in solidarity with all those challenging anti-Black racism, xenophobia, Islamophobia, anti-Semitism, white supremacy, and any other form of bigotry.