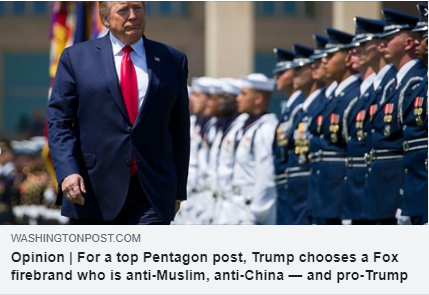 While not yet officially nominated, news of Tata being tapped by Trump has been reported by Politico and the Washington Post.

SEE: Washington Post: For a top Pentagon post, Trump chooses a Fox firebrand who is anti-Muslim, anti-China — and pro-Trump

Last year, Tata authored a novel titled “Double Crossfire” that falsely claimed young Muslim men in Great Britain engage in the “gang-raping [of] British women as part of their transition to manhood” and such crimes are covered up by the government and media. This anti-Muslim trope is widely used by Islamophobic far-right groups and white supremacists in Europe.

In 2018, Tata also said on Fox News that “there is intent to harm Western society by Islam” and “it’s a truism that has to be built into policy so we can strengthen our borders.”

“CAIR strongly urges the Senate Armed Services Committee to reject anti-Muslim conspiracy theorist Tata’s nomination to the number three job in the Defense Department,” said CAIR Director of Government Affairs Robert S. McCaw. “Tata’s revolting promotion of the anti-Muslim trope that Muslim youth in Britain engage in sex crimes as a rite of passage and that Islam is a perceived threat to the West makes him totally unfit to serve as the Pentagon’s policy chief.”

He noted that CAIR has repeatedly expressed concern about the Trump administration’s Islamophobic, white supremacist and racist rhetoric, policies and appointments.

“Islamic ‘grooming’” is “a right of passage for young Muslim men in Great Britain” in which “young men were gang-raping British women as part of their transition to manhood.“

“The rising tide of Islam in Europe had seeped into the historically secular governments, and their collective media now forbade any speech against Islamic crimes.“