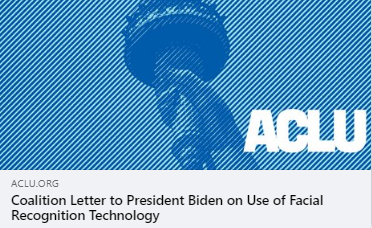 (SEATTLE, WA, 2/17/21) – The Washington state chapter of the Council on American-Islamic Relations (CAIR-Washington) today joined a coalition of more than 40 organizations calling on President Biden to take executive action imposing a federal moratorium on the use of facial recognition technology.

The letter, sent by CAIR-Washington, the ACLU, Leadership Conference on Civil and Human Rights, the Electronic Frontier Foundation, and Amnesty International, among others, urges the Biden administration to take three critical steps addressing the use of facial recognition technology by the government.

“The use of face surveillance gives the government massively-enhanced powers to identify, locate, and track individuals based on images of their faces,” said Brianna Auffray, Legal and Policy Manager at CAIR-Washington. “Even if this technology is perfectly accurate—which it is not—the threat of this surveillance has an outsized impact on historically over-surveilled communities.”

She added: “With these abuses fresh in the mind of our community and others, there is no way that facial recognition technology can be implemented in public spaces without discouraging people from exercising their First Amendment rights of speech, association, and free exercise of religion. Halting the proliferation of facial recognition technologies is absolutely necessary if President Biden is seriously committed to achieving racial and religious equity and protecting the civil liberties of all Americans.”

Multiple studies, including ones by the ACLU of Northern California, researchers at the Massachusetts Institute of Technology and Microsoft Research, and the U.S. government, have found that facial recognition technology is biased against people of color, women, trans people and other marginalized groups. A 2018 study led by Black researchers at MIT concluded that some facial analysis algorithms misclassified Black women nearly 35 percent of the time, while nearly always getting it right for white men.

The ACLU tested Amazon’s Rekognition software in 2018 against photos of members of Congress and found that 28 were falsely matched to mugshots, with lawmakers of color misidentified at disproportionately high rates. The federal government in 2019 released its own findings on facial recognition technology, concluding that the technology generally works best on middle-aged white men’s faces, and not so well for people of color, women, children, or the elderly.

Multiple Black men, including Robert Williams, have been falsely arrested based on erroneous facial recognition matches. Williams was arrested in front of his wife and two young daughters for a crime he did not commit and was held in custody for more than 30 hours before police finally released him, all due to the reliance on flawed technology by Detroit police. There are likely many others who have been falsely arrested due to the technology, and the numbers will only grow if its use continues.

The biased and error-filled nature of facial recognition is not its only problem, however. Even if it worked flawlessly, the technology would give the government the ability to track our movements at all times through public and private spaces, to houses of worship, political meetings, bars, health care appointments, and many other places that reveal aspects of our private lives.

There is also great concern from Muslim civil liberties groups that the legacy overreach from the global war on terror and its impact on the lives of innocent individuals will continue to be deployed to utilize this growing technology. And while the Muslim community in particular is very entrenched in the tech industry, we recognize the need for ever-expanding technology to be deployed in an ethical manner that takes civil liberties and privacy into account.