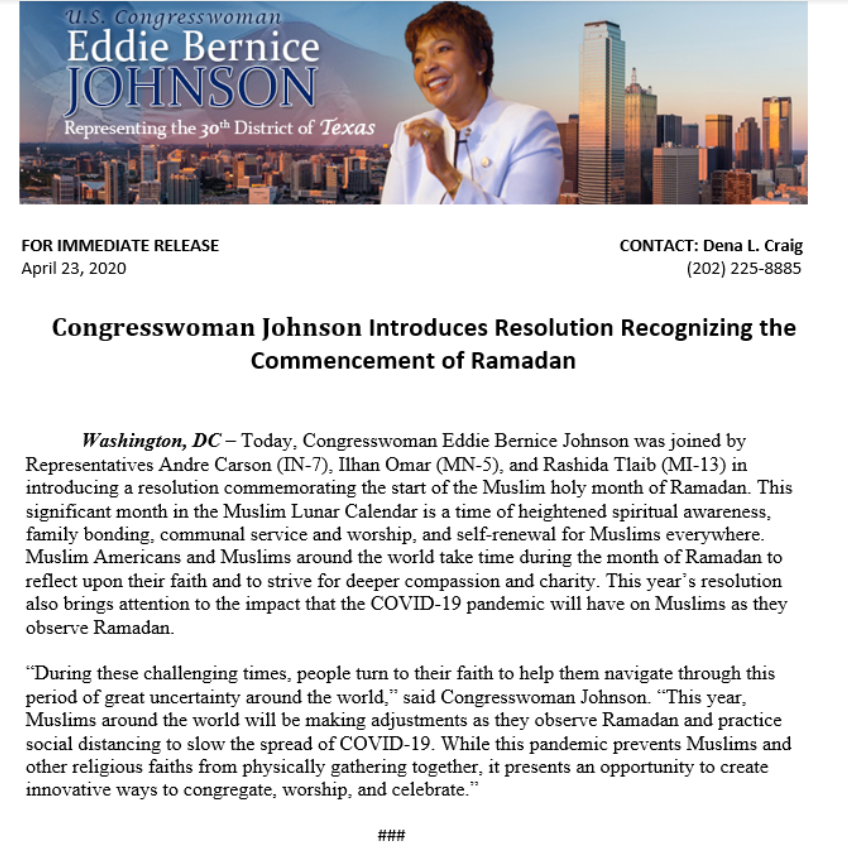 Take Action: Contact Your Representative to Urge Support for This Year’s Ramadan Resolution

The resolution was introduced last Thursday marking the first day of the Islamic holy month of Ramadan, the month on the Islamic lunar calendar during which Muslims abstain from food, drink and other sensual pleasures from break of dawn to sunset.

“CAIR welcomes the introduction of H.Res. 940 and thanks Representatives Johnson, Carson, Omar, Tlaib, and the many other members of Congress who cosponsored this resolution, for joining with the American Muslim community in celebrating the blessed month of Ramadan,” said CAIR Director of Government Affairs Robert S. McCaw. “While this year Muslim communities are unable to celebrate and pray together in our houses of worship because of COVID-19 stay-at-home-orders, we continue to see elected officials nationwide proactively take steps to foster and ensure the sense of community and inclusion remains.”


CLICK HERE OR SEE BELOW TO READ THE RESOLUTION IN FULL:

IN THE HOUSE OF REPRESENTATIVES

H. RES. 940 – Recognizing the commencement of Ramadan, the Muslim holy month of fasting and spiritual renewal, and commending Muslims in the United States and throughout the world for their faith.

Whereas it is estimated that there are approximately 1,800,000,000 Muslims worldwide;

Whereas Ramadan is the holy month of fasting and spiritual renewal for Muslims worldwide, and is the 9th month of the Muslim calendar year;

Whereas the observance of the Muslim holy month of Ramadan commences at dusk on April 23, 2020, and continues for one lunar month;

Whereas one of the purposes of fasting during the holy month of Ramadan is for Muslims to gain a better understanding of the plight faced by those who are less fortunate;

Whereas Muslims contribute greatly to charitable organizations that help people from all faiths in the United States and around the world by providing medical assistance, family services, scholastic supplies, before- and after-school programs, feeding the hungry, and providing recuperation efforts following natural disasters;

Whereas Thomas Jefferson was the first President to host an iftar, the meal breaking fast during Ramadan, at the White House in 1805, and every President since 1996 has hosted an iftar for members of the community during their Presidencies;

Whereas the Department of State and United States Agency for International Development have hosted iftars through the years for staff and members of the diplomatic community;

Whereas the Department of Agriculture has hosted iftar dinners since 2008 to recognize and welcome interfaith dialogue and collaboration with individuals and organizations whose core values often overlap significantly with the mission of the Department, including disaster recovery, reducing food waste, ensuring access to nutritious food, and fostering safe, prosperous, and thriving communities;

Whereas the Pentagon has held an iftar dinner every year since 1999, recognizing the thousands of American Muslims serving in all branches of the United States military;

Whereas this Ramadan, most Muslims around the world are making every effort to support self-quarantine and physical distancing due to the COVID–19 pandemic as advised by local, regional, State, and national public health or government authorities;

Whereas American houses of faith, community centers, schools, and other public centers have made a great sacrifice in suspending all nonessential gatherings until further notice, including services for major religious events such as Ramadan, Passover, and Easter; and

Whereas Muslims, like other faith communities, during these trying times are finding new ways to bridge the gap of physical distancing by celebrating their faith and Ramadan online through virtual congregational sermons and community events: Now, therefore, be it

(1) in order to demonstrate solidarity with and support for members of the community of Islam in the United States and throughout the world, the House of Representatives recognizes the Islamic faith as one of the great religions of the world; and

(2) in observance of and out of respect for the commencement of Ramadan, the Muslim holy month of fasting and spiritual renewal, the House of Representatives acknowledges the onset of Ramadan and expresses its deepest respect to Muslims in the United States and throughout the world on this significant occasion.