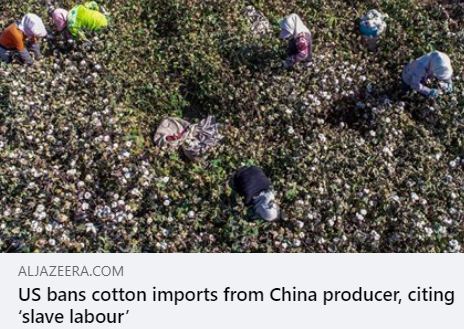 (WASHINGTON, D.C., 12/3/2020) – The Council on American-Islamic Relations (CAIR), the nation’s largest Muslim civil rights and advocacy organization, today welcomed the U.S. government’s decision to ban cotton imports from China that have been connected to forced labor of detained Uighur Muslims.

On Thursday, the US Customs and Border Protection (CBP) agency released an official order to ban cotton imports from China’s Xinjiang Production and Construction Corps (XPCC). XPCC is one of the largest cotton producers in China, accounting for up to 30 percent of production.

“American companies should not be in the business of providing profits based on slave labor in Chinese concentration camps,” said CAIR Government Affairs Director Robert S. McCaw. “The next logical step would be for Congress to adopt the Uyghur Forced Labor Prevention Act — H.R.6210/S.3471 — and start the immediate imposition of sanctions on China and Chinese officials.”

He said the remaining challenge will be successfully screening the production lines of American companies, in an effort to scrub XPCC from all levels of production. Companies like Zara, Gap Inc, and others have already reported that they found no trace of XPCC cotton in their products.

Cooperation with American businesses is welcome, and the federal government should produce procedures for monitoring compliance with the new ban. In the past, American companies have called for less restrictions on products produced by forced labor in China.

More than a million Uyghur Muslims have been detained and imprisoned in Chinese concentration camps for practicing their Islamic faith.

The Support the Uyghur Human Rights Policy Act of 2019 (S. 178/H.R. 649) calls for an end to the arbitrary detention of the Uyghurs, the imposition of sanctions on China and Chinese officials, and economic restrictions on companies operating in Xinjiang – the Chinese province home to Uyghur Muslim and the concentration camps detaining them.