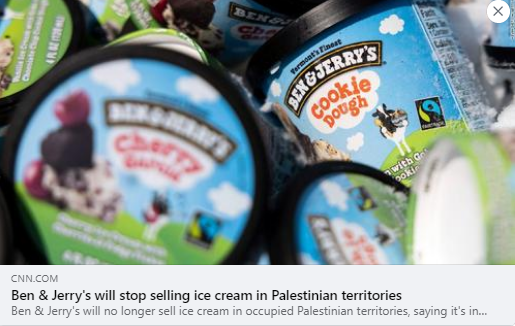 SEE: Ben & Jerry’s Will End Sales of Our Ice Cream in the Occupied Palestinian Territory

In its statement, Ben & Jerry’s said that selling ice cream in OPT was “inconsistent with our values.” The company has also said they will not be renewing a license agreement with an Israel-based company that manufactures Ben & Jerry’s ice cream and distributes it throughout the region. The company said they will continue to do business in Israel under a different arrangement but did not specify what that arrangement would entail.

“We welcome Ben & Jerry’s decision to stop doing business in what is internationally recognized as illegally-occupied territory,” said CAIR National Communications Director Ibrahim Hooper. “American corporations should not support Israeli violations of human rights and the breaking of international law.”

He noted that CAIR recently called on the Hilton Corporation to stop its plans to build a hotel over a bulldozed mosque in the Uyghur region.

Hooper said CAIR has consistently defended the right to engage in the Boycott, Divestment and Sanctions (BDS) movement, which seeks to pressure Israel to meet its obligations under international law.