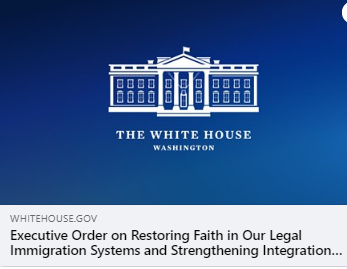 READ: Executive Order on Restoring Faith in Our Legal Immigration Systems and Strengthening Integration and Inclusion Efforts for New Americans

“The public charge rule was clearly anti-immigrant and designed for the sole purpose of harming the most vulnerable and at-risk among us.

“As a nation, our government should be working to serve those who are the most in need, instead of seeking to cut them off from services during a national health and food crisis.

“The American Muslim community encourages the Biden-Harris administration to deliver on the promise of this and related immigration orders by restoring humanity into our admission processes and repairing the harm caused by the prior administration.”

The executive order on immigration also:

2) Creates a task force to reunify families separated under the prior administration,

3) Instructs federal agencies to review regulations, policies, and guidance that have set up barriers to our legal immigration system; and,

4) Ensures refugees and asylum seekers have access to legal avenues to the United States, among other reforms.

Three years ago, CAIR joined the Center for Law and Social Policy (CLASP) and the National Immigration Law Center (NILC), co-chairs of the Protecting Immigrant Families, Advancing our Future campaign (PIF), and over 1,100 other organization in an open statement strongly opposing this proposed rule and urged “the Administration to withdraw this dangerous proposal and work with us to build policies that support immigrants as healthy, productive and successful members of America’s communities and families.”

The Washington-based civil rights organization also submitted a petition with more than 500 signatures to the Federal Register calling on the Trump administration to withdraw the rule.