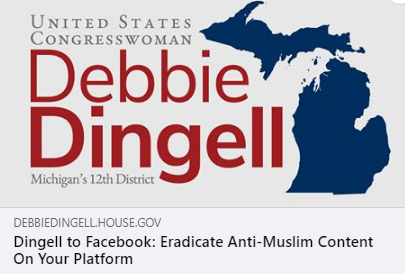 (WASHINGTON, D.C., 12/16/20) – The Council on American-Islamic Relations (CAIR), the nation’s largest Muslim civil rights and advocacy organization, today thanked Congresswoman Debbie Dingell (D-MI) – and the 29 congressional colleagues that joined her – in urging Facebook to take immediate action to eliminate anti-Muslim bigotry from that social media platform. CAIR was one of several organizations named by Rep. Dingell in her press release announcing the letter.

The letter cited instances of on the “platform to dehumanize Muslims and stoke violence and genocide against Muslims around the world” and “reports of inaction by Facebook in response to the abuse.”

In the letter to Facebook CEO Mark Zuckerberg, Rep. Dingell asked for Facebook to “immediately implement the following measures” –