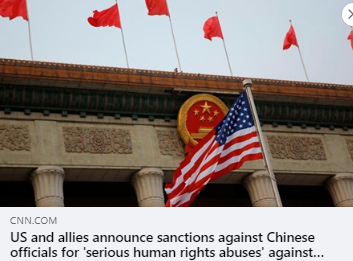 On March 30, Free Uyghur Now, CAIR and human rights partners will hold a “Call It Genocide” Uyghur Muslim rights rally in front of the Chinese Embassy in Washington, D.C.

The EU named Zhu Hailun, former head of the Xinjiang Uyghur Autonomous Region (XUAR), and three other officials over the detention and indoctrination program targeting Uyghurs and other Muslim ethnic minorities in Xinjiang.

SEE: US and allies announce sanctions against Chinese officials for ‘serious human rights abuses’ against Uyghurs

U.S. and allies set to announce coordinated sanctions on China over Uyghurs ‘genocide’

“We welcome these new sanctions as a signal that the international community is beginning to take China’s genocidal campaign against Uyghur Muslims seriously. The entire world, especially Muslim-majority nations, must speak out and take concrete action to end China’s use of concentration camps, forced labor rape and torture to eradicate an entire ethnic group.”

He noted that on Tuesday, March 30 (noon-1 p.m.), Free Uyghur Now, CAIR and human rights partners will hold a “Call It Genocide” Uyghur Muslim rights rally in front of the Chinese Embassy in Washington, D.C. The rally will be livestreamed from CAIR’s Facebook page.