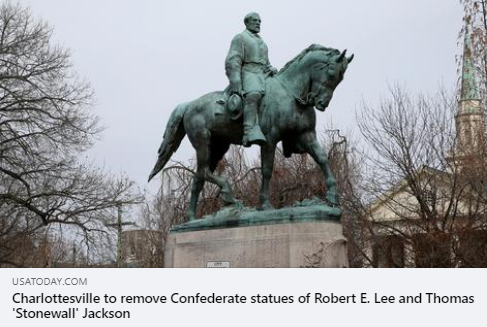 (WASHINGTON D.C., 7/9/2021) – The Council on American-Islamic Relations (CAIR), the nation’s largest Muslim civil rights and advocacy group, today welcomed a decision by the city of Charlottesville, Va., to remove monuments to Confederate generals Robert E. Lee and Stonewall Jackson that sparked a 2017 violent white supremacist and neo-Nazi rally in that city that resulted in the murder of Heather Heyer.

In a news release, the city said the bronze statues will be removed and stored until the city council decides where to move them.

“We welcome the decision to finally remove these monuments to treason, slavery and white supremacy from the public sphere,” said CAIR National Communications Director Ibrahim Hooper. “When a nation continues to honor those who sought to defend slavery and systemic anti-Black racism, it is impossible to move forward as a just and inclusive society.”

He noted that earlier this week, CAIR welcomed a decision by the Board of Supervisors of Virginia’s Loudoun County to begin the process to rename roads named for Confederate and segregationist figures.

Hooper added that CAIR has repeatedly urged and supported the removal of Confederate symbols nationwide.