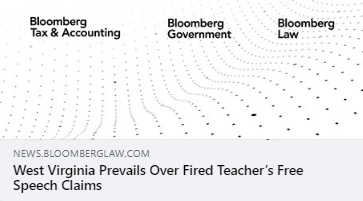 (WASHINGTON, D.C., 3/23/2021) – The Council on American-Islamic Relations (CAIR), the nation’s largest Muslim civil liberties and advocacy organization, today welcomed a decision by a federal court in West Virginia to dismiss a lawsuit by a teacher in that state who was fired in 2017 after posting anti-Muslim and racist tweets.

CAIR said the U.S. District Court for the Southern District of West Virginia ruled that Mary Durstein failed to show that the state’s actions had a substantial chilling effect on her right to free speech because the law allowing revocation or suspension of a teaching certificate did not specifically target freedom of expression.

“We welcome this ruling as a reaffirmation that those who apparently hold biased views of others – while having the right to express even those bigoted views — should not be teaching our nation’s children,” said CAIR National Communications Director Ibrahim Hooper.

Earlier this month, CAIR condemned a bill introduced in the West Virginia legislature that would prevent the removal of Confederate monuments.