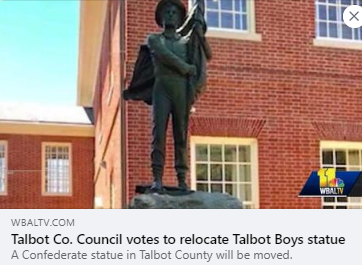 (BALTIMORE, MD, 9/15/2021) — The Maryland office of the Council on American-Islamic Relations (CAIR) today welcomed the Talbot County Council’s vote to remove a Jim Crow era statue, which represents a Confederate soldier, from the lawn of the Talbot County Courthouse in Easton, Maryland.

Known as the “Talbot Boys,” it is believed to be one of the last known confederate monuments on public property in the state. In recent years, it amassed several complaints over its racist history and its misrepresentation of the community.

“Public monuments reflect a society’s values and priorities, and this statue is a symbol of racial injustice ironically on the grounds of a building in which justice is supposed to be delivered,” said CAIR’s Maryland Director Zainab Chaudry. “Removing it is the right thing to do, especially in an era where our country is finally acknowledging the shortcomings and inconsistencies in our justice system on a meaningful scale.”

In the past, CAIR echoed calls for its removal supported and supported a lawsuit filed earlier this year to expedite the process.

The lawsuit, filed by the Maryland Office of the Public Defender, ACLU of Maryland and the NAACP’s Talbot County branch, read in part: “The Talbot Boys statue says just this: ‘In this building, white people are given priority over Black people;’ and ‘Justice for Black people means something different than what Justice means for white people means.’ To view it differently is to ignore objective fact.”

This lawsuit was filed after repeated rejections from the county officials to take the statue down last year. The previous vote had ended in a 3-2 vote, with the majority of the council members voting to keep the monument in place.