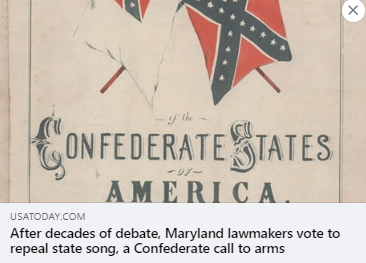 (BALTIMORE, MD, 3/30/21) – The Maryland office of the Council on American-Islamic Relations (CAIR) today welcomed state lawmakers’ final move yesterday to repeal “Maryland, My Maryland” – the controversial, pro-Confederacy tune adopted as the state song in 1939 that constituents have protested for decades – and urged Governor Hogan to sign the measure into law when it is presented to him.

“We applaud our state lawmakers who took the right position on this issue. A state song is chosen by the legislature as a symbol of the state,” said CAIR’s Maryland Director Zainab Chaudry. “It should contain themes that promote inclusivity and preserve our country’s ideals, instead of reflecting elements that are a Civil War-era call-to-arms for the Confederacy.”

Yesterday, the House of Delegates passed the bill with a 95-38 vote as the trial for former Minneapolis police officer Derek Chauvin began on charges of murder and manslaughter in George Floyd’s death nearly one year ago. State Senators previously unanimously voted in favor of the bill 45-0.

Written originally as a poem by James Ryder Randall in 1861, it is a call to arms urging Marylanders to secede from the Union to join the Confederacy. It refers to Abraham Lincoln as a “vandal,” “despot,” and “tyrant.”

Decades after the Civil War ended, the poem was adapted and designated as Maryland’s official state song in the late 1930’s by the state legislature. CAIR announced its support for repealing the state song earlier this year.