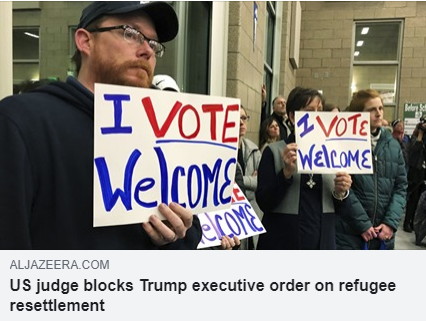 (WASHINGTON, D.C., 1/15/20) -The Council on American-Islamic Relations (CAIR), the nation’s largest Muslim civil rights and advocacy organization, today welcomed a ruling by a Maryland judge stating that President Donald Trump cannot give state and local governments “veto power” to reject refugees from resettling within their borders.

U.S. District Judge Peter Messitte blocked Trump’s executive order requiring resettlement agencies to get written consent from officials in any jurisdiction where they want to resettle refugees beyond June of this year.

“We welcome the Maryland federal district court’s decision to block for now the Trump administration’s Executive Order 13888, which attempted to impose a state-by-state refugee ban. This executive order, if left standing, would interfere with the ability of refugees to obtain the services they need to resettle in our nation.

“While we are optimistic that the courts will ultimately do the right thing, we must also remain vigilant. The court’s decision only temporarily blocks the order and we will continue to work to ensure a welcoming society for refugees.

“As a nation, we must unite our voices to stop the demonization of refugees who come to this country to rebuild their lives. We will continue to raise our voices and call on people of all faiths and backgrounds to take a stand to welcome and advocate for refugees in their communities.

“We appreciate the leadership of HIAS, Church World Service (CWS), Lutheran Immigration and Refugee Service (LIRS), and the International Refugee Assistance Project (IRAP) in taking on this important fight.”