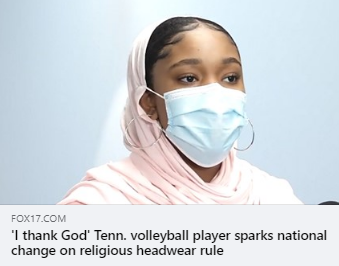 “We thank the National High School Sports Federation for doing the right thing,” said CAIR National Executive Director Nihad Awad. “This historic decision paves the way for Muslim athletes and other people of faith far beyond Tennessee to compete without fear that a referee will prevent them from competing simply because of their religion. We commend Najah Aqeel for her courage, and we commend the American Muslim Advisory Council in Tennessee for successfully representing for Najah and her family.”

Last September, a referee disqualified the freshman high school student Aqeel from a volleyball match because of a state rule requiring athletes who specifically wears hijab to receive prior authorization. The American Muslim Advisory Council of Tennessee and the ACLU of Tennessee called for both the state and national sports associations to revamp their rules. CAIR made the same demand at the national level.

In October, CAIR met privately with the leadership of the NFHS and encouraged the federation to rewrite rules that required Muslim athletes obtain “authorization” in order to compete wearing a hijab. CAIR also proposed alternate language to that effect. The federation responded by pledging to review and seek approval for changes to the rule.

CAIR and other civil rights groups have successfully challenged similar bans on religious attire and accommodations in a number of sports.

For example, CAIR helped bring about a ruling by the Switzerland-based International Basketball Federation (FIBA) lifting its the ban on religious head coverings and allowing players who wear articles of faith — including the Islamic head scarf (hijab) to participate in international competitions.

Many other athletic organizations have already modified their rules and policies to account for the various religious needs of participants.

In the past, CAIR helped a Muslim wrestler at the University at Buffalo in New York obtain a waiver from the NCAA to wear a beard he believes is required by his faith

In 2011, CAIR welcomed a decision by the International Weightlifting Federation (IWF) to modify its policy on competitor apparel to allow modest Islamic attire. The IWF policy change came following intervention by CAIR in the case of a Muslim weightlifter in Georgia who wished to compete while covering her hair, arms, and legs.

In Minnesota, CAIR helped a teenage Muslim boxer take part in competition after previously being barred because she wears hijab.