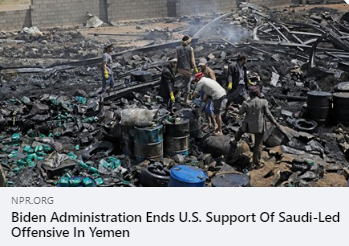 Last week, CAIR called on the Biden Administration to fully end all military and political support for Saudi Arabia’s war in Yemen. That call came in response to President Biden’s decision to pause and review the previous administration’s multi-billion-dollar arms sale to the United Arab Emirates (UAE).

CAIR continues to urge the Biden-Harris administration to completely cancel the “corrupt and dangerous” sale of U.S. military weapons to Saudi Arabia and the UAE.

“The Biden-Harris administration should take the next logical step and cancel the corrupt and dangerous sale of advanced U.S. fighter jets to the UAE, as approved by the prior administration.

“Our government should not be in the business of providing military support or selling billions in advanced weaponry to any country that violates human rights.”

In addition to committing war crimes in Yemen, Saudi Arabia and the UAE have bolstering corrupt dictators and suppressing peaceful democrats across the Middle East in recent years. The UAE has also smeared American Muslim advocacy organizations for speaking out against human rights abuses in the region.

In December, CAIR joined other human rights groups and members of congress in opposing the U.S.-UAE arms deal, which occurred as part of the “normalization” deal negotiated between the Israeli and UAE government by the Trump Administration.