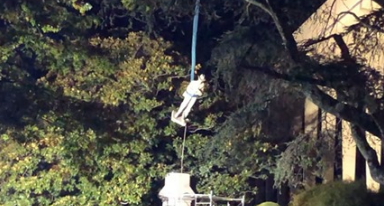 (WASHINGTON, D.C., 10/23/2020) — The Council on American-Islamic Relations (CAIR), the nation’s largest Muslim civil rights and advocacy organization, today welcomed the removal of a Confederate monument from in front of an Alabama courthouse and condemned a North Carolina House candidate for his racist attack on a journalist.

A Confederate monument in front of the Madison County Courthouse in Huntsville, Ala., was removed early this morning. The statue will be placed at a local cemetery.

Earlier this month, CAIR expressed support for a proposed amendment on the November ballot to remove racist language from the Alabama constitution.

In North Carolina, GOP candidate Madison Cawthorn attacked a journalist for going to “work for non-white males, like Cory Booker, who aims to ruin white males running for office.” The racist attack has since received backlash.

SEE: NC GOPer Tries to Clean Up Racist Attack On Those Who ‘Ruin White Males Running For Office’

“Anti-Black racism and white supremacy must be challenged in whatever form they appear nationwide,” said CAIR National Communications Director Ibrahim Hooper. “Racist rhetoric and symbols only serve to perpetuate the vicious legacy of white supremacy.”