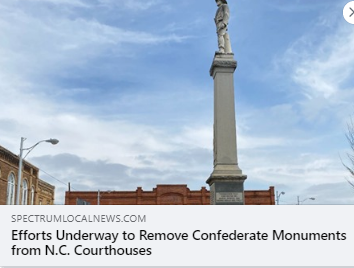 (WASHINGTON, D.C., 3/25/2021) – The Council on American-Islamic Relations (CAIR), the nation’s largest Muslim civil liberties and advocacy organization, today welcomed the removal of a confederate statue in Emporia, Va., and the plan to remove a confederate monument from Asheville, N.C.

In Virginia, a confederate statue was removed from Courthouse Square in Emporia and transported to the Emporia Cemetery. On July 1, 2020, a law signed by Gov. Ralph Northam went into effect, allowing localities to remove Confederate monument. The Greensville County Board of Supervisors previously agreed to pay costs associated with the statue’s relocation and its base.

In North Carolina, Asheville’s City Council voted Tuesday evening to remove the Vance Monument from its spot in the city’s main public space. The monument is named after Zebulon Vance, North Carolina’s governor during the Civil War.

“Only by removing symbols honoring America’s legacy of slavery, anti-Black racism and white supremacy can we move forward as a nation,” said CAIR National Communications Director Ibrahim Hooper. “We welcome the removal of any monument honoring Confederates or the Confederacy and urge that all such monuments be removed nationwide.”