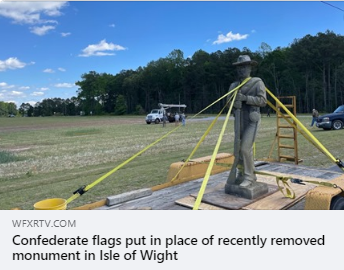 (WASHINGTON, D.C., 5/10/2021) – The Council on American-Islamic Relations (CAIR), the nation’s largest Muslim civil liberties and advocacy organization, today welcomed the removal of a Confederate Statue in Isle of Wight County, Va., and condemned neo-Nazi propaganda found in in that same state.

In Isle of Wight County, the Confederate statue was transported to private property after having been on display outside the county courthouse for more than 115 years. The move came after the Board of Supervisors voted in February to get rid of the statue. After its removal, someone placed Confederate flags at the site.

in Greene County, Va., neo-Nazi flyers were distributed to residents. The community was targeted by propaganda from the White Supremacist group New Order, whose letters contained white supremacist language.

“As we welcome positive initiatives to remove and repudiate our nation’s legacy of slavery and white supremacy, it is more important than ever to speak out against those who spread hatred and bigotry,” said CAIR National Communications Director Ibrahim Hooper.