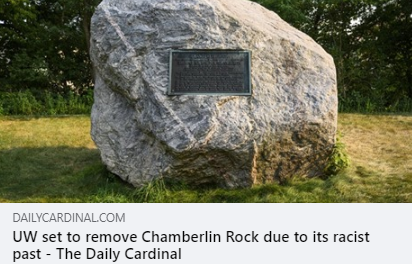 (WASHINGTON, D.C., 11/20/2020) — The Council on American-Islamic Relations (CAIR), the nation’s largest Muslim civil rights and advocacy organization, today welcomed the removal of Chamberlin Rock from the University of Wisconsin Madison campus because of its racist past and decried the decision to keep a Confederate monument in Franklin County, Va.

Students on campus opposed the rock and its history of racial oppression because in the 1920s, the Chamberlin Rock was referred to by a racial slur.

SEE: UW set to remove Chamberlin Rock due to its racist past

“Every remnant of our nation’s unfortunate history of anti-Black racism and white supremacy should be removed and replaced with symbols that honor inclusion and respect for diversity,” said CAIR National Communications Director Ibrahim Hooper.