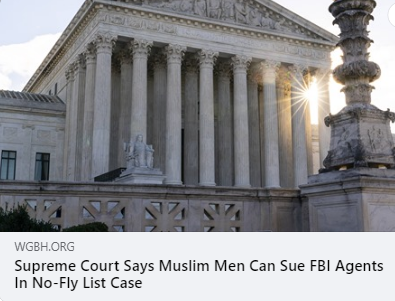 The case is titled Tanzin v. Tanvir. The case was brought by City University of New York’s (CUNY) legal clinic known as CLEAR (Creating Law Enforcement Accountability & Responsibility) on behalf of three Muslims who were told that they would only be removed from the No Fly List if they agreed to become FBI informants against their community.

“In the context of suits against Government officials, damages have long been awarded as appropriate relief,” explained Justice Thomas. Indeed, damages are “also the only form of relief that can remedy some RFRA violations.”

This echoes the message CAIR told the court. CAIR and its California, Michigan, New York, and Oklahoma chapters signed an amicus brief along with dozens of other religious rights organizations that warned the court that “[i]n order to protect religious liberty, RFRA must deter would-be wrongdoers.” The amicus brief went on to explain that in many cases, “the statute cannot achieve its explicitly stated aims without a damages remedy.”

“We congratulate Ramzi Kassem and the CUNY CLEAR Clinic on their victory, and commend them for their amazing advocacy,” added Masri.

The court in Tanzin also explained how the decision interacted with the Religious Land Use and Individualized Persons Act, known as RLUIPA, a religious freedom law that protects the same rights in state and local government land use and incarceration. Contrasting the decision with one that prohibited damages against state governments under RLUIPA, Justice Thomas explained, “[t]he obvious difference is that this case features a suit against individuals, who do not enjoy sovereign immunity.”

CAIR attorneys regularly bring suits against the federal government under RFRA and against state and local prisons under RLUIPA on behalf of Muslims whose rights have been violated.