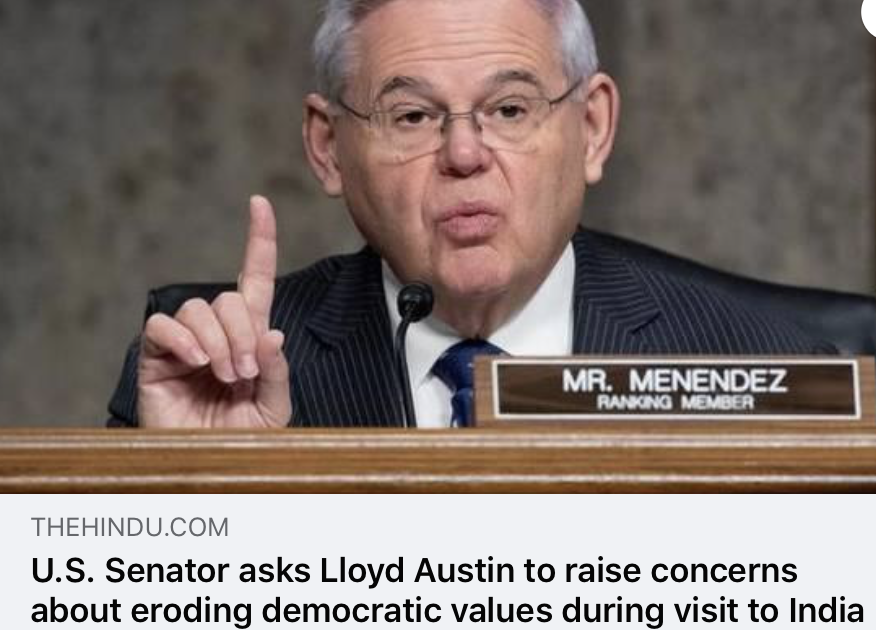 Chairman Menendez expressed these concerns in a March 17 letter to U.S. Secretary of Defense Lloyd Austin while addressing India’s recent purchase of the Russian S-400 missile defense system. Secretary Austin is expected to be in New Delhi from March 19-21 and meet with Defense Minister Rajnath Singh and senior national security officials.

Sen. Menendez requested Secretary Austin clarify during his trip to New Delhi that the United States’ relations with India remain contingent upon the upkeep of democratic values while citing the Indian governments’ oppressive handling of the farmer protests, the use of sedition laws, the Citizenship Amendment Act (CAA) to disenfranchise Muslim Indian citizens, and abrogation of Article 370 in Kashmir.

In his letter Chairman Menendez wrote in part:

“Moreover, in recent years, rising anti-Muslim sentiment and related government actions like the Citizenship (Amendment) Act, the suppression of political dialogue and arrest of political opponents following the abrogation of Article 370 in Kashmir, and the use of sedition laws to persecute political opponents. . .”

“CAIR welcomes and applauds Chairman Menendez for his commitment to human rights and the religious freedom of Muslims in India and Kashmir. We urge the Senate Committee on Foreign Relations to hold the far-right Indian government accountable in its egregious abuse of farming protestors, journalists, and minorities, and for its oppression of Muslims throughout the country and Kashmir. The Biden administration should consider applying the Countering America’s Adversaries Through Sanctions Act and other measures to curb India’s abuses.”

Senator Menedez’s letter indicates that sanctions against Indian still might be an option; India’s purchase of the S-400 may function as the mitigating circumstances to enact sanctions, highlighted under Section 231 of the Countering America’s Adversaries Through Sanctions Act (CAATSA).