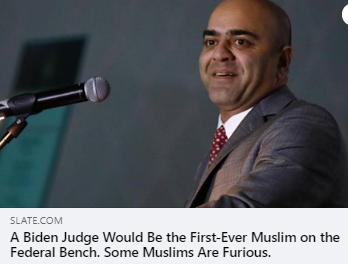 (WASHINGTON, DC – 4/28/2021) — The Council on American-Islamic Relations (CAIR), the nation’s largest Muslim civil rights and advocacy organization, today welcomed the start of confirmation hearings for President Biden’s diverse slate of nominees to serve as federal judges and encouraged the Senate Judiciary Committee to probe unanswered questions about the background of one of the nominees that were raised in a news article published last night.

SEE: A Biden Nominee Would Be the First Muslim on the Federal Bench. Some Muslims Are Furious

The confirmation hearing for federal magistrate judge and former prosecutor Zahid Quraishi — who would be the first American Muslim to serve as a Senate-confirmed federal district court judge–is scheduled for today before the Senate Judiciary Committee.

Aspects of Judge Quraishi’s work history, including his service as a “detention legal adviser” during the American occupation of Iraq from 2003 to 2007 when prisoner abuse was rampant, and his service with ICE during the final two years of the Bush Administration, have sparked concern in the civil rights community.

In a letter sent to the Senate Judiciary Committee today, CAIR asked senators to probe these issues with Judge Quraishi.

“We appreciate President Biden’s efforts to appoint federal judges with diverse backgrounds and unique professional experiences, including nominees with experience as civil rights attorneys and public defenders. We also welcome the administration’s effort to enrich the federal judiciary with American Muslim judges. Muslim attorneys contribute greatly to our nation as civil rights attorneys, public defenders and in many other roles.

“However, questions remain about aspects of Judge Zahid Quraishi’s background, including his service as a legal advisor to military detention centers and private contractors during the occupation of Iraq, and his role with ICE during the final years of the Bush administration.

“We encourage Judge Quraishi to thoroughly explain his activities in these roles, and we encourage senators to ask detailed questions about these roles. In particular, what legal opinions did Judge Quraishi offer during his work as a detention adviser during the occupation of Iraq? Did he become aware of prisoner abuse or other misconduct during his time there? If so, how did he respond?  Did he provide any legal guidance to Blackwater as part of his legal aid to private contractors? These and other questions must be addressed.”