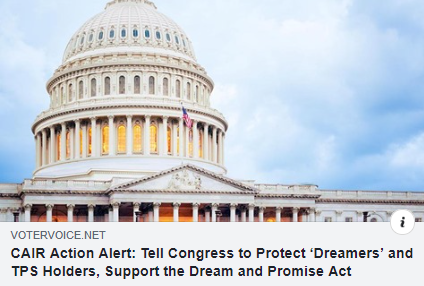 CAIR, the nation’s largest Muslim civil rights and advocacy organization, is also calling on Congress to pass the DREAM Act to fully-protect Dreamers.

“CAIR welcomes the Supreme Court’s outright rejection of Trump’s illegal attempt to terminate DACA – which protects from deportation more than 600,000 undocumented young people who were brought to our nation as children.

“As with the Muslim and Africa Ban, Trump’s attempt to terminate DACA is fueled by a hated for people of color and driven by the demands of anti-immigrant extremists.

“CAIR urges the court to stand firm against any future attempt by the Trump administration to harm Dreamers, some of the most dynamic and success-oriented members of our society.

“All Americans must reaffirm their commitment to protecting Dreamers and reject Trump’s attempts to use them as an election issue or bargaining chip to extract immigration concessions from Congress.

“Because the Supreme Court’s ruling is only a temporary solution, Congress must now act to permanently protect DACA by passing the Dream and Promise Act of 2019.”

CAIR is urging all Americans to contact their members of Congress today and urge support for the Dream and Promise Act.

In a major legal defeat for President Trump, Supreme Court Chief Justice John Roberts in his decision wrote in part: “We conclude that the acting secretary did violate the [Administrative Procedure Act],” and that the decision to rescind DACA “must be vacated,” adding the Trump Administration’s “total rescission” of DACA was “arbitrary and capricious.”

The decision however did not rule that it was unconstitutional for the Trump administration to terminate DACA – only the way in which it went about doing so.

Roberts instructed: “The appropriate recourse is therefore to remand to DHS so that it may reconsider the problem anew.”

Because of this, there is the prospect that the Trump administration will again attempt to terminate DACA.

The day of the hearing, CAIR called on the Supreme Court to support Dreamers and reject the Trump Administration’s attempt to terminate DACA.