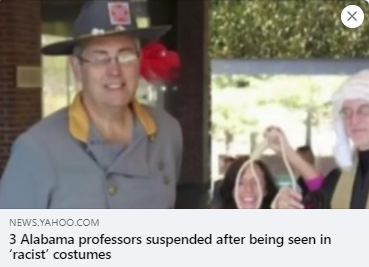 (WASHINGTON, D.C., 3/8/2021) – The Council on American-Islamic Relations (CAIR), the nation’s largest Muslim civil liberties and advocacy organization, today welcomed the suspension of three professors from the University of Southern Alabama (USA) for dressing in racist costumes.

Photos reportedly resurfaced online showing a former dean of USA’s College of Business and current professor, along with two other professors at a 2014 party. Costumes included dressing as a confederate soldier and the display of a noose and a whip.

Following the release of the images, there was a protest on campus on Friday and an online petition with almost 3,000 signatures calling for the university to fire the three professors.

3 Alabama professors suspended after being seen in ‘racist’ costumes

“We welcome the decision to place the professors on leave because it sends the message that expressions of white supremacy by educators are not acceptable and are antithetical to an inclusive learning environment,” said CAIR National Communications Director Ibrahim Hooper.

CAIR recently decried the decision by Alabama’s House Judiciary Committee to reject legislation that would give cities and counties an avenue to take down Confederate monuments.