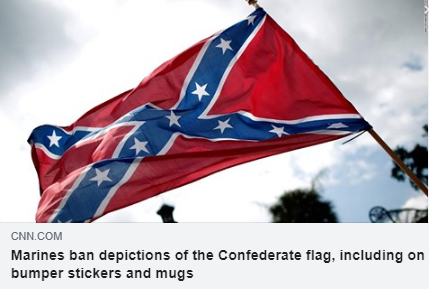 (WASHINGTON, D.C., 6/8/20) – The Council on American-Islamic Relations (CAIR), the nation’s largest Muslim civil rights and advocacy organization, today welcomed a decision by the U.S. Marine Corps to ban all public displays of the Confederate flag from military installations.

That order requiring the removal of any depiction of the flag came following a number of removals of Confederate symbols from public spaces nationwide amid anti-racism protests. Exceptions to the ban include educational or historical displays, state flags that incorporate the Confederate flag or Confederate soldiers’ gravesites.

SEE: Marines ban depictions of the Confederate flag, including on bumper stickers and mugs

“We welcome the decision by the U.S. Marine Corps to ban a symbol of racism, slavery, treason, and white supremacy from its facilities and hope this sends a strong message to all military personnel,” said CAIR Director of Government Affairs Department Robert S. McCaw. “We urge leaders of all branches of our nation’s military to now take concrete steps to change the name of any facility honoring Confederate generals.”

He noted that CAIR has repeatedly urged the removal of Confederate holidays, symbols and racist laws nationwide.

The Washington-based civil rights organization and the American Muslim community are standing in solidarity with all those challenging anti-black racism.