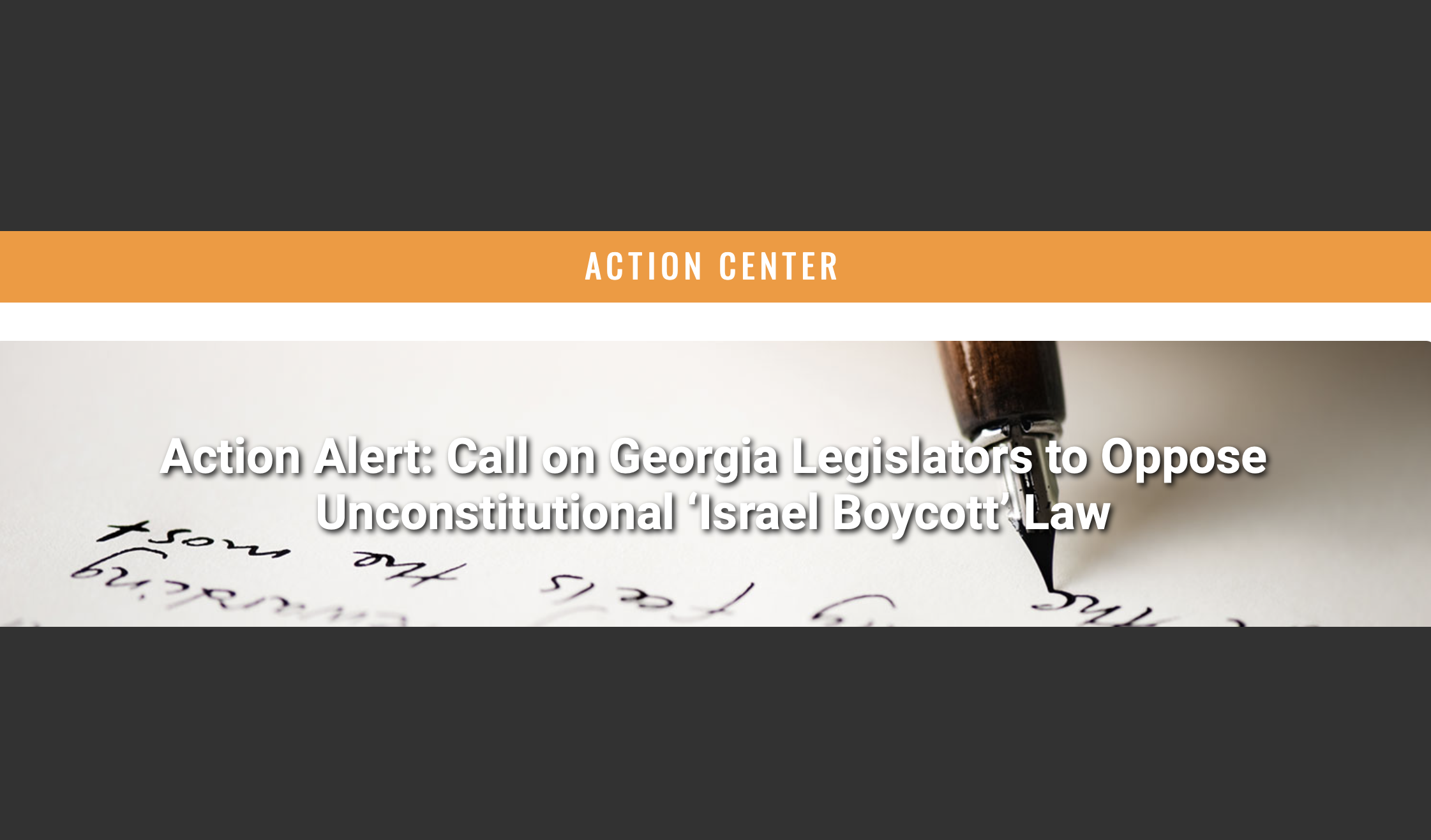 The groups are also asking Georgia state residents to contact their state representatives and senators requesting that they vote against any attempt to salvage Georgia’s illegal anti-boycott law.
Action Alert: Call on Georgia Legislators to Oppose Unconstitutional ‘Israel Boycott’ Law

In 2016, Governor Nathan Deal signed into law SB 327, which requires any person or company that enters into a contract with the State of Georgia worth $1,000 or more to sign a loyalty oath pledging not to boycott the Israeli government based on its treatment of Palestinians.

Earlier this year, CAIR-Georgia, PCJF, and the CAIR Legal Defense Fund filed a federal free speech lawsuit against the University System of Georgia, which cancelled a journalist’s speaking engagement because she refused to sign a state-mandated oath pledging not to boycott the Israeli government.

SEE: Video of Remarks at Public Hearing (Beginning at 13:10)

Other states have introduced similar alterations after their original anti-boycott laws were defeated in court. By raising the contract limit, the bill would make it less likely the law would be applied, and thus less likely to be challenged.

“Extinguishing Americans’ First Amendment rights to boycott is unconstitutional no matter what the cost of the contract,” said Mara Verheyden-Hilliard, co-founder and director of the Partnership for Civil Justice Fund. “This is a transparent attempt to insulate an illegal law from challenge, but the state of Georgia cannot lawfully put a price tag on free speech rights.”

“Just as Alabama could not ban African-Americans from working for the state while participating in the Montgomery Bus Boycott, Georgia cannot similarly punish Georgians who boycott Israel to protest its human rights abuses against Palestinian people. Rep. Silcox, Rep. Wilensky, and other legislators must answer to the people of Georgia, not the whims of a foreign consulate.”

“HB 1058 is a transparent effort to insulate an unconstitutional law from judicial scrutiny.  It is an indication that, even proponents of these anti-free speech measures know how far outside the First Amendment’s bounds their bill really is.”

SEE: Abby Martin Banned From Speaking at US University For Refusing to Sign Pro-Israel Pledge

Similar measures have been enacted in 25 other states as part of an effort to block the growing Boycott, Divestment and Sanctions (BDS) movement. Modeled after the global South African anti-apartheid movement, the BDS movement’s stated goal is to pressure the Israeli government to end its occupation of Palestinian territory.

The federal court in Texas held that that the state’s anti-boycott law “threatens to suppress unpopular ideas” and “manipulate the public debate” on Israel and Palestine “through coercion rather than persuasion.” The Court concluded: “This the First Amendment does not allow.”