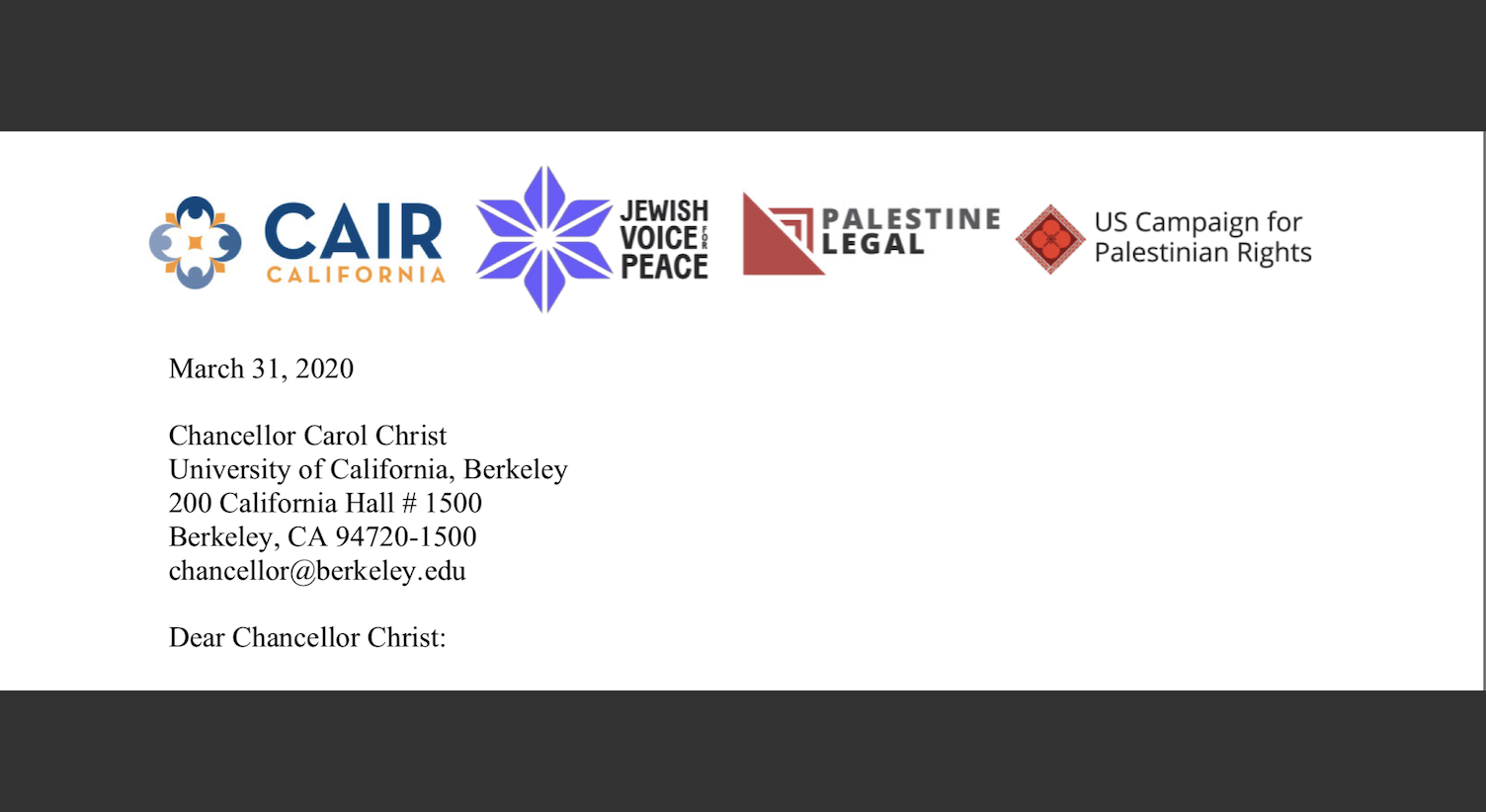 The letter describes physical and verbal attacks students experienced on and near campus in the aftermath of a campaign by a student senator to censor and malign a photo display by the student group Bears for Palestine.

The Associated Students of the University of California (ASUC) senator proposed a student government resolution to censor the display and tried to intimidate a Palestinian student who opposed the resolution by threatening to add her to the Israel-aligned blacklisting site Canary Mission.

After the censorship resolution was voted down at an ASUC meeting in February, an anonymous student took to the floor to announce his plans to join the Israeli military in order to kill Palestinians, saying, “I plan, after I graduate, on joining the IDF to eliminate Palestinian nationalism and Palestinians from the world.” After making the statement, the student suddenly fled the room, leaving other students worried for their physical safety.

This threat was just the tip of an iceberg of harassment Palestinian students and other allies, including Arab, Black, Indigenous, Jewish, Muslim, and Queer students, have faced on campus this semester.

“In the past week, a hijabi woman was spat on, and another had her hijab torn off her head. A Black student was attacked with urine, another student was followed home, another was called a ‘terrorist sympathizer,’” Bears for Palestine wrote in a statement on February 12.

Multiple students reported generally fearing for their safety and going out of their way to establish impromptu systems to protect each other, including escort systems, taking time and energy that would otherwise have been spent preparing for exams and completing assignments.

The following are excerpts of some of the harassment and intimidation students experienced and the impact it had on their education and their health:

Palestinian student spit on and unable to focus

After an ASUC meeting on the censorship resolution, a Palestinian student who spoke during the public comment session was spit on while giving a campus tour to Yemeni students from an Oakland high school. In the ensuing weeks, the student felt unsafe walking on campus.

Not knowing which direction a threat might come from, the student constantly looked over their shoulder as they walked across campus over the next few weeks in fear of a physical attack. As a result, the student has been unable to focus on their studies.

Nightmares about being doxed after threats by senator

Another student, who is the daughter of Palestinian refugees, was told by the ASUC senator who proposed the censorship resolution that he would personally make sure that she was added to the blacklisting site Canary Mission. As a result she was unable to participate in the public comments for fear of being recorded and doxed.

In the ensuing weeks, the student had difficulty sleeping, experiencing nightmares of her family being doxed, getting hurt, and no longer being allowed to visit family in Palestine.

Stress vomiting after being followed home and to the mosque

A Black Muslim student was called a “f***** terrorist sympathizer” on his way home from the Black Resource Center by an individual he recognized as having spoken in favor of the censorship resolution. He did not alert police because he was wearing a kufi, a Muslim head cap, and believed that as a Black Muslim male, the police would view him as the aggressor. He stopped wearing his kufi.

He could not go to class for days because of stress vomiting. Eventually he sought support from the campus administration and was told by a dismissive administrator not to let his experience of anti-Blackness and Islamophobia get in the way of his studies.

Muslim student sick with stress, afraid to walk on campus

A Muslim student who spoke at the second ASUC hearing felt afraid walking on campus after the hearing and was conscious of people glaring at them. After the threat, the student spent two days in bed, sick with stress. The cluster of attacks on visibly Muslim students in the wake of the ASUC hearings left the student worried that they will be targeted for assaults or attacks.

The threat and harassment students faced has, however, mobilized many in the Berkeley community to support Palestinian students and their allies. Students devoted countless hours in the aftermath of the censorship campaign to meeting with administrators.

During these meetings, students explained the way the repression had disrupted their education and described the support they need from administrators. Students have demanded institutional representation, training on Islamophobia for students and staff, and a public condemnation of the Canary Mission blacklist as a threat to student safety, freedom of speech, and academic freedom.

As the COVID-19 pandemic prompted a campus shutdown forcing students and faculty to adjust to the new reality of life under quarantine, students’ efforts to educate administrators and seek accountability have also been disrupted.

In the letter, we urge UC Berkeley administrators to continue to work with students on meeting their needs and ensuring equal access to education in a safe campus environment, both virtually during the quarantine—while students find transformative ways to continue to organize, build, and engage in political education—and when students return in the fall.

“The harassment and death threats directed towards Muslim and Palestinian students as well as allies of Bears for Palestine at UC Berkeley create an environment that is not conducive to freely expressed political speech and safety for students of all backgrounds.

We hope the letter will urge the University to address these systematic issues.”