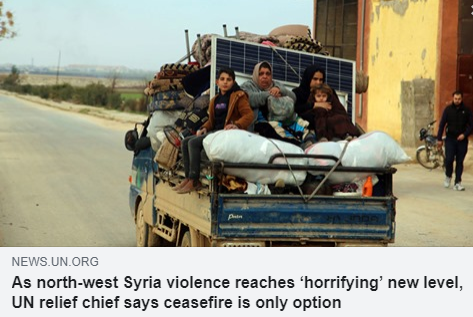 (WASHINGTON, D.C., 2/19/20) – In light of the “biggest humanitarian horror story of the 21st century” according to the United Nations, a group of human rights, civic, faith-based organizations, and the last American Ambassador to Syria, Ambassador Robert Ford, will hold a news conference tomorrow (Thursday, February 20) on the Hill in Washington, D.C., to bring attention to the Syrian humanitarian crisis in Idlib and urge for increased pressure on Russia and the Syrian regime to stop the bombings and the displacement of Syrian civilians.

News conference participants will call on the Trump administration to apply all diplomatic pressure to stop the bombing, provide humanitarian assistance, protect civilians and urge UN Secretary-General Antonio Guterres to visit the 900,000 newly-displaced civilians and discharge his responsibilities.

WHAT: Humanitarian, Civic, Human Rights, Faith-Based Groups, and Ambassador Robert Ford to Demand Attention to and Action towards the Humanitarian Crisis in Idlib, Syria (#SaveIdlibChildren)

WHO: Representatives of Civic and Faith-based Organizations and Syrian-American Humanitarians Returning from Idlib

Speakers scheduled to address the press conference include:

Organizations sponsoring the press conference include:

Some three million Syrian civilians in Idlib are suffering in catastrophic conditions. More than 900,000 people, 80 percent being women and children, have been displaced in northwest Syria – with most of them stuck in a small area on the border with Turkey.

This represents the largest exodus of civilians since WWII and the biggest humanitarian horror story in the 21st century according to Mark Lowcock, UN Under Secretary General for Humanitarian Affairs. Turkey presently hosts 3.6 million Syrian refugees and reports that it cannot absorb any more.

On February 17, Lowcock publicly stated: “The crisis in northwest Syria has reached a horrifying new level” and that the “biggest humanitarian horror story of the 21st Century will only be avoided if Security Council members, and those with influence, overcome individual interests and put a collective stake in humanity first. The only option is a ceasefire.”

“Tens of thousands of women and children are cramped in rudimentary camps that don’t have the most basic services. They are facing the harsh winter forgotten by the rest of the world,” said Dr. Zaher Sahloul, founder of Syria Faith Initiative and president of MedGlobal, a Chicago-based organization providing emergency medical care in crisis areas around the world.

He called on President Donald Trump to increase the humanitarian assistance to the displaced Syrians and to apply all diplomatic pressure on Russia to stop the bombing in Idlib.

“The United Nations and its Secretary-General Antonio Guterres have been slow in their response to the catastrophic situation. They should make ending this crisis a priority,” said Sahloul. “It is incumbent on us to pay attention and use our moral and political power to alleviate the suffering of the Syrian people and bring an end for one of the worst humanitarian disasters in our lifetime.”