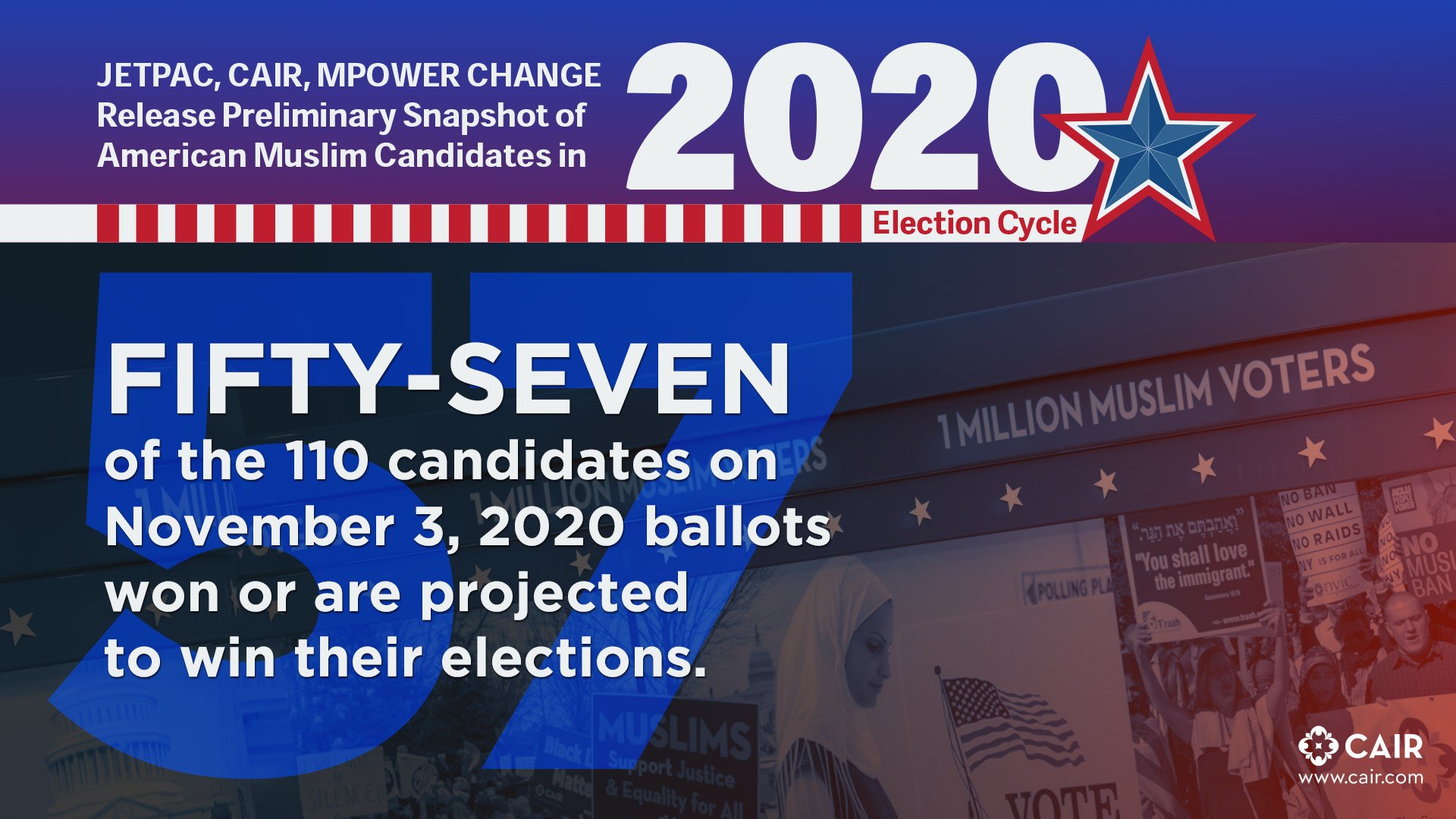 (WASHINGTON, D.C., 11/6/20) — Jetpac, a representation-driven organization that trains American Muslims who want to run for office, The Council on American-Islamic Relations (CAIR), the nation’s largest Muslim civil rights and advocacy organization, and MPower Change, the largest Muslim-led social and racial justice organization in the United States, today released a preliminary snapshot of candidates who publicly identify as Muslim in the 2020 election cycle.

Snapshot: 110 candidates were on 2020 general election ballots across 24 states and Washington D.C., which is the highest number since the 3 organizations started mapping the electoral progress of politicians who identify as Muslim.

“Muslim Americans are celebrating the election of members of our community across this country – from the school boards to the halls of Congress,” said Linda Sarsour, executive director of MPower Change. “No matter what happens on the presidential level, we will continue to build power, engage voters and focus on down ballot races because that’s where the real impact on our lives lies.”

“Increasing our political representation is a critical part of defeating the violent rise of Islamophobia here and around the world because it forces elected officials and the media to include our perspective in the narrative on healthcare, the economy, criminal legal system, and every other issue impacting American life,” said Mohammed Missouri, executive director of Jetpac. “I’m inspired by this new generation of Muslim political activists who are changing our community’s civic engagement through effective relational organizing to build diverse coalitions in the fight for economic and racial justice.”

“The American Muslims who ran for office and won were able to do so by building diverse coalitions that seek a just future in which every American’s civil rights are protected,” said CAIR National Executive Director Nihad Awad. “Over the past several years, Muslim Americans have had to fight against the threat of exclusion. We now have a historic opportunity to fight for inclusion while advancing policies that promote freedom and justice.”

Fifty-seven of the one hundred and ten candidates on November 3, 2020 ballots won or are projected to win their elections. At least seven made representation history.

Below is a preliminary summary of Muslim electoral results from November 3, 2020:

Jetpac is a representation-driven civic engagement organization. Its mission is to make our government more representative of the American people.