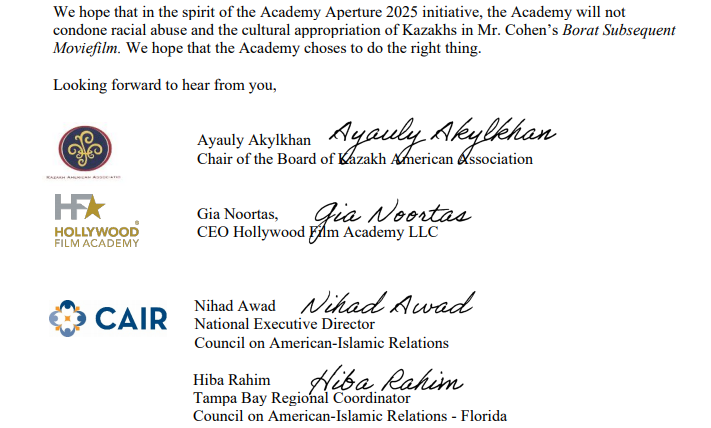 (WASHINGTON, D.C., 11/16/2020) – The Kazakh-American Association, the Council on American-Islamic Relations (CAIR) and members of the global Kazakh ethnic community today called on the Academy of Motion Picture Arts & Sciences and other major film associations to bar the sequel to the Oscar-nominated 2006 film Borat from awards consideration for fomenting racism, bigotry and discrimination against Kazakhstan and its people.

[NOTE: The original Borat film was nominated for an Academy Award for Best Adapted Screenplay and won a Golden Globe award for Best Actor in a Musical or Comedy, among other awards recognition.]

In letters sent to the Academy of Motion Picture Arts and Sciences, the Hollywood Foreign Press Association, the Directors Guild of America and British Academy of Film and Television Arts, the advocacy groups noted that the original Borat resulted in concrete harm to the Kazakh people, whose culture was falsely depicted as “violent, sexist, anti-Semitic, and otherwise dangerous.”

“The Kazakh community worldwide is underrepresented and inherently vulnerable. Sacha Baron Cohen understands this fact and exploits the Kazakh people by hijacking our ethnic identity, whitewashing us, and inciting harassment toward us. Considering today’s socially aware political climate and the new diversity policies adopted by film associations worldwide, it is unbelievable that a film which openly berates, bullies, and traumatizes a nation of people of color is still an acceptable form of entertainment.”

The Kazakh-American Association and CAIR are calling on the Oscars, HFPA, BAFTA, and other film associations to bar Cohen, his cast and crew, and the film, Borat Subsequent Moviefilm, from their respective competitions.

Noortas added, “We hope that in the spirit of recently announced diversity and equality measures, these organizations will condemn racial abuse and the cultural appropriation of Kazakhstani people in Mr. Cohen’s Borat sequel.”

“We join Kazakh-Americans in calling for film associations to ban the Borat sequel from awards consideration. We recognize that Mr. Cohen sometimes uses his bigoted characters to expose bigotry in others. However, Mr. Cohen cannot counter racism and bigotry against some people while perpetuating racism and bigotry against other people, especially Kazakh-Americans, whose real culture may be unfamiliar to most Americans.”

SEE: Letters to the Academy of Motion Picture Arts and Sciences, HFPA, DGA and BAFTA