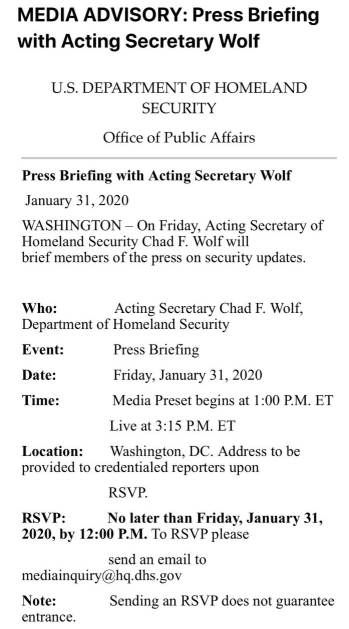 (WASHINGTON, D.C., 1/31/20)Â â€“ Later today, the Council on American-Islamic Relations (CAIR), along with other civil rights organizations, will hold a news conference to respond to President Trumpâ€™s expected announcement of an expansion of the Muslim Ban executive orders.

[MEDIA NOTE: If the expansion has not been announced by the time of the news conference, contact CAIR Government Affairs Director Robert McCaw, 202-999-8292, rmccaw@cair.com, for updates.]

According to Politico, Trump is expected to reveal an expansion of the ban this Friday.

Politico states: â€œThe expected announcement — confirmed by two people familiar with the matter — had initially been planned for this past Monday to coincide with the three-year anniversary of the original order, which restricted travel from several majority-Muslim nations. But the administration was delayed as it responded to the fast-spreading coronavirus, according to an administration official.â€

According to that report, one of the changes calls for people coming from Sudan, a Muslim majority nation, to be barred from the U.S. diversity visa program. A draft of the expanded ban would place restrictions on six other countries. Countries that have been considered for new restrictions include Belarus, Myanmar, Eritrea, Kyrgyzstan, Nigeria, and Tanzania. It is not clear which countries will be on the final list.

Earlier this week, CAIR and other organizations took part in a court hearing and rally in Richmond Va., challenging the Trump administration’s Muslim Ban based on its discriminatory intent.Â