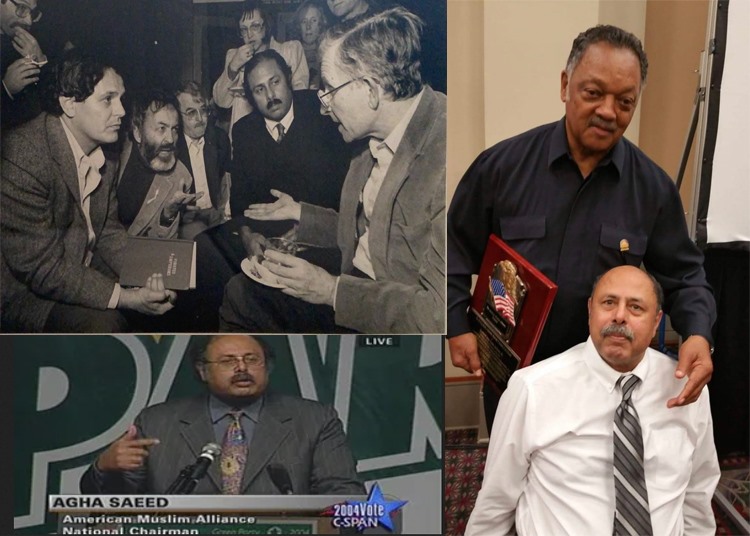 Later today, a funeral service will be held for Dr. Agha Khalid Saeed, a respected poet, philosopher, academic, pillar of the American Muslim community, and the “father of American Muslim political activism.” He leaves behind a loving daughter and family. He passed last Friday afternoon in Monterey, CA after years of fighting Parkinson’s disease.

Inna lillahi wa inna ilayhi raji’un (To God we belong and to Him we return).

Dr. Saeed, a Pakistan-born, California-based professor exuded the strength and courage felt in each and every action he took. Perhaps no action was more consequential than his founding of the American Muslim Alliance (AMA) and the American Muslim Taskforce. In the words of one journalist, Richard Curtiss, he was “dignified, articulate and… (an) unflappable university professor” who founded the AMA, believing that as “adherents of America’s fastest-growing religion, the vast majority of American Muslims, whether of immigrant or indigenous stock…demonstrated that they are ready for effective political action.” He was also among a key group of American Muslim leaders who were scheduled to meet with President George W. Bush on 9/11.

In over 40 years of unapologetic activism, he energized and galvanized Americans of all stripes with an unwavering message of unity, equality, and political engagement. While some may consider him controversial, he always spoke with mutual respect and a refined grammar of propriety. He was meticulous in his use of his words and could move, even the most ardent of his detractors.

Agha Saeed’s entire life seemed pointed toward political activism whenever the need and wherever the opportunity arose. He played a catalytic role in building critical organizations that focused on civil rights, and spearheaded the first Muslim bloc vote of 2000 and beyond.

In the words of Laila Al-Arian, daughter of his closest of friends Sami Al-Arian, he was “inimitable, courageous and (a) principled visionary and American Muslim leader…. He stood for justice and took brave stances when few were willing to do so. He worked tirelessly and with no ego or expectation of credit to build up the American Muslim community and worked tirelessly to empower it, never wavering in his commitment to justice or supporting those who faced the wrath and power of the state. He stood up for Palestine and Palestinians targeted for their advocacy when there was too much to lose.”

Former National Chair of the Green Party, Jo Chamberlain, adds that “Dr Saeed was a friend and fellow political activist. He was always welcoming, kind and supportive of other views and beliefs. He will be missed by all who knew him, and especially by me.”

Dr. Saeed, says Curtis, was “certain that the way for Muslims to make their growing presence felt in the United States is to start forming pragmatic, election-year coalitions according to local needs and circumstances with diverse groups ranging from the Christian Coalition to African Americans to get Muslim or like-minded candidates elected.” As early as 1997, he exhorted, “If we are to be effective in 1998 (politically),” then “we have to start as early as possible in 1997.”

Mark Hinkle, Former National Chairman of the Libertarian Party, said “Dr. Saeed was a visionary leader who understands that common ground can be found among diverse religious and political groups if you have an open mind. He was a gentleman in every sense of the world.”

Dr. Ghulam Nabi Fai, a leading Kashmiri activist, said, Dr. Saeed “was the firm believer of tripartite dialogue between India, Pakistan and Kashmiri leadership. He never compromised on this basic principle of the Kashmir dispute.”

“We all stand on his shoulders,” said Iyad Afalqa, President of the California Democratic Council.

In his decades of work he created close friendships among those of all political parties, religions, and ideologies. He would use these relationships to build coalitions, including the California Civil Rights Alliance, which included member organizations such as the Libertarian Party, Green Party, Unitarian Church, and Catholic Church.

In his later years with an advanced stage of Parkinson’s, he worked tirelessly in pursuit of justice, and in great dedication to the country and community he loved. He has left an indelible mark on the landscape of America, and Muslim Americans will continue on the path that he helped pave.

Dr. Saeed was the founder of numerous community organizations including:

California Civil Rights Alliance
From 2004 to 2006, as Congress debated controversial issues related to the PATRIOT Act, domestic surveillance, and other civil liberties abuses, the AMA along with its civil rights coalition (the California Civil Rights Alliance) spearheaded the successful passage of the nation’s largest USA PATRIOT ACT censure (SJR 10).

Pakistan American Democratic Forum and Pakistani American National Alliance
Founded in 1982, the Pakistan American Democratic Forum (PADF) has always acted independent of any and every government in Pakistan and it has consistently upheld the cause of democracy. At times, it has been the only Pakistani-American organization to speak out against the egregious violations of the Constitution by the Musharraf regime.

The PADF has focused on helping to build stable and efficient democratic institutions. As stipulated in its mission statement, the PADF works for social development, institution building, literacy enhancement and consolidation of democracy in Pakistan, and community development, civic education, leadership training and citizen efficacy in the United States.

In the immediate aftermath of September 11th, and the disparate policies against Muslims that ensued, a sense of urgency swept the American Muslim community for a voice that could effectively represent them in the American political process. Shifting out of neutral and political apathy and into full gear, a national umbrella coalition of the ten largest and mainstream Muslim organizations came together to create the American Muslim Taskforce on Civil Rights and Elections (AMT). The parenthetical “son” of the American Muslim Political Coordination Council (AMPCC), which was created in 1998 and consisted at its time of only 4 of those mainstream organizations.