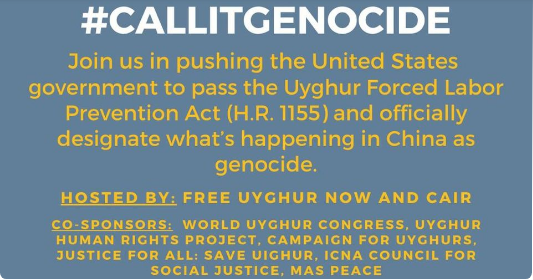 (WASHINGTON, D.C., 3/29/21) – Tomorrow, Tuesday, March 30 (noon-1 p.m.), Free Uyghur Now and the Council on American-Islamic Relations (CAIR) will hold a “Call It Genocide” Uyghur Muslim rights rally in front of the Chinese Embassy in Washington, D.C. The rally will be livestreamed from CAIR’s Facebook page.

WHO: Call it Genocide Rally speakers will include: