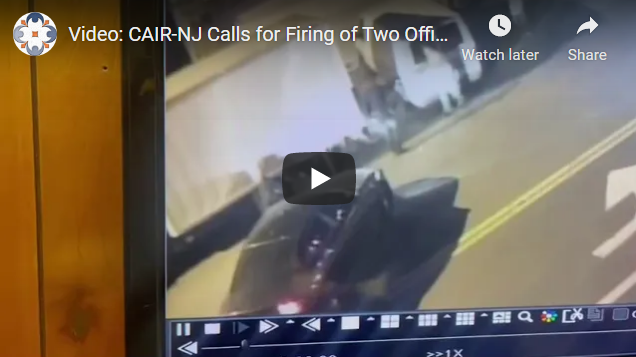 (SOUTH PLAINFIELD, NJ, 2/12/2021) – The New Jersey chapter of the Council on American-Islamic Relations (CAIR-NJ) today called for the firing of the two Officers for an apparent assault on a Muslim Arab-American youth. CAIR-NJ also called for a full investigation into the involvement of the other two Officers present at the scene.

Alsaidi was diagnosed with head trauma and a concussion.

Video: CAIR-NJ Calls for Firing of Two Officers for Assaulting an Arab-American Youth

“The disturbing video shows two officers approach and beat the youth to the ground. The teen posed no visible threat to either officer and was not given an opportunity to comply with the officer’s orders — assuming any orders were even given. Instead, the teen was brutalized while two additional offices came to clear the area of witnesses. He was later diagnosed with head trauma and a concussion.

“The officers then allegedly fabricated a story in their police report to cover up their assault. Their report was proven to be false once the video surfaced almost two months later.

“We are calling for the immediate termination of the two Officers for their brutality and their attempt to cover up their crime. Anything less than termination would be an insult to the residents of Paterson, and an affront to justice. Furthermore, a thorough and transparent investigation into the involvement of the other two Officers is needed immediately.

“To see such a reprehensible attack happen at the hands of those who supposedly serve and protect Paterson residents is more than disheartening, it is revolting and deserving of immediate punishment.

“The Paterson Police Department must act swiftly to rectify this horrific situation and take actionable measures to mitigate the possibility of it ever reoccurring.