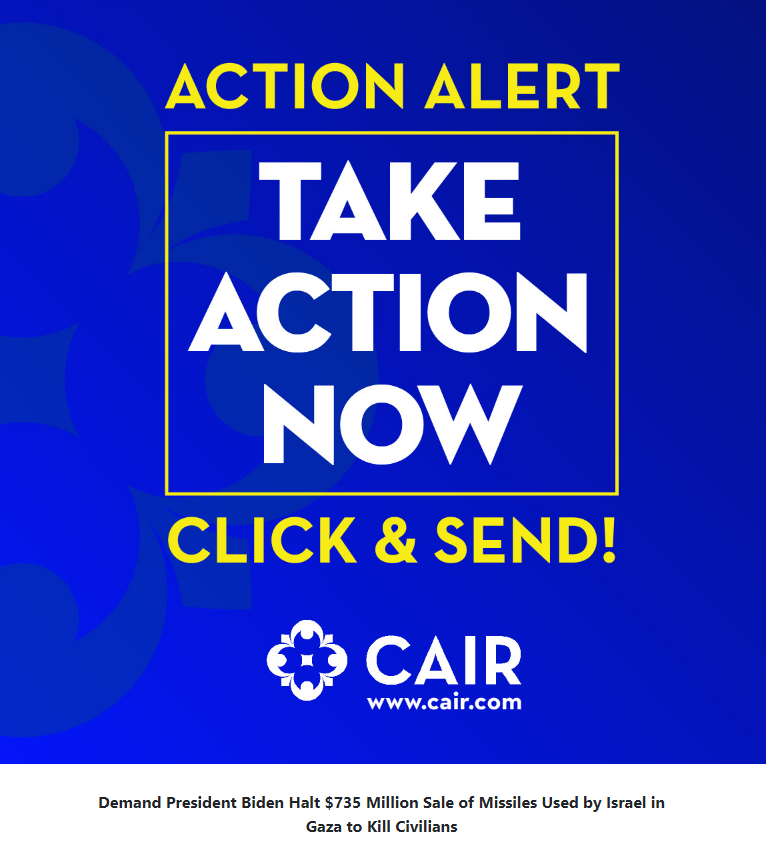 (WASHINGTON, D.C., 5/18/21) – The Council on American-Islamic Relations (CAIR), the nation’s largest Muslim civil rights and advocacy organization, is calling on all Americans to demand that President Biden halt the $735 million sale of precision-guided weapons to Israel. The sale includes the same types of missiles already being used by Israel to kill more than 200 civilians and destroy residential buildings in Gaza.

Media outlets initially reported that Chairman Meeks would send a letter today formally requesting a delay so that members of the House Foreign Affairs Committee could review the weapons and missile sale, which the Biden administration recently approved. However, House Majority Leader Steny Hoyer today indicated that Meeks will not send a letter and will instead pursue discussions with the Biden administration regarding the sale.

The Biden administration approved the sale on May 5, prior to the May 10 start of Israel’s bombing campaign in Gaza.

“We call on President Biden to immediately halt the $735 million sale of weapons to Israel – the same type of missiles that have been used to kill more than 200 people in Gaza, including more than 60 children, and injured more than 1,600 – unless the United States wants the blood of more Palestinian families on our hands.

“The American Muslim community also urges House Foreign Affairs Committee Chair Gregory Meeks – and the Democratic members of the committee – to procedurally request a delay in the sale of arms to Israel that would be used to commit further war crimes in Gaza.

“Prime Minister Benjamin Netanyahu has exposed a self-inflicted weakness in the White House over President Biden’s inability to push the Israeli government into a ceasefire while it continues to receive nearly unlimited U.S. military and political backing. Instead, the White House feels obligated to send Netanyahu more U.S. weapons that will be used by Israel to hurt Palestinian civilians and America’s standing at home and around the world.

“All Americans, including American Muslims, must demand President Biden not sell advanced weaponry to Israel. Such a sale would signal our nation’s indifference to Israeli airstrikes that have killed and injured civilians and destroyed civilian infrastructure like utilities, electric lines, water supplies, roads, and other basic needs on a mass scale.”

According to the Washington Post, the “weapons sale to Israel that includes Joint Direct Attack Munitions (JDAMS) — kits that transform so-called “dumb” bombs into precision-guided missiles — and Guided Bomb Unit-39s (GBU-39), both of which are used against Palestinians.”

Chairman Meeks held an emergency committee meeting on Monday to discuss the sale, the increasing number of civilians killed and injured by Israel in Gaza, and how to apply more pressure on President Biden to forced Israeli Prime Minister Benjamin Netanyahu to put a stop to the destructive Israeli airstrikes and enter a ceasefire with militants in Gaza.

In 2014, Israel carried out a similar military campaign that lasted seven weeks and took the lives of more than 2,000 Gazans, which included more than 500 children.

Yesterday, CAIR called on the Biden administration to stop blocking statements from the United Nations Security Council that would criticize Israel’s brutal military actions against Palestinians in Gaza and demand an immediate ceasefire.

On Sunday, CAIR joined an initiative led by American Muslims for Palestine (AMP) to boycott the White House Eid Celebration in response to the Biden administration’s defense of Israeli attacks on Palestinians and Israel’s planned ethnic cleansing in Sheikh Jarrah in occupied East Jerusalem.

The Biden administration has refused to criticize the Israeli government for sparking this cycle of violence by attempting to expel families from their homes in Sheikh Jarrah and attacking Palestinian worshippers in Masjid Al-Aqsa.

Over the weekend, thousands of people took to the streets in cities across the world to show their solidarity and support for the Palestinians as Israel continued its bloody bombardment in the Gaza strip.

On Saturday, an Israeli air raid flattened a high rise building that housed the offices of the Associated Press and Al Jazeera sending shockwaves to the journalism community.

An increasing number of Democratic members of Congress have called upon President Biden to more assertively confront the Israeli government’s violation of Palestinian human rights.