CAIR Applauds Wisconsin School Board for Response to Anti-Islam, Anti-Mask Statements During Meeting 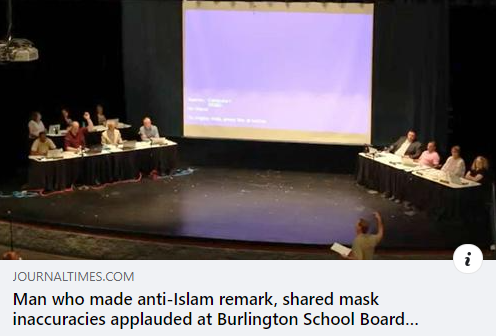 (WASHINGTON D.C., 8/11/2021) – The Council on American-Islamic Relations (CAIR), the nation’s largest Muslim civil rights and advocacy organization, today applauded the Burlington, Wisconsin school board for its response to anti-Islam and anti-mask statements made during a meeting.

During a public comment portion of a Burlington school board meeting Monday, a man opposed to requiring masks in schools expressed anti-Muslim sentiment, saying “in the Muslim faith they found out long ago that if they put a mask over people’s face, they’ll capitulate, they’ll give in.”

During the public comment portion of the meeting, others called for the school board to oppose the Wisconsin Department of Public Instruction’s order to more strongly address the “severe, pervasive, and persistent … racially hostile environment” in its schools.

“Anti-Muslim bigotry is far too often allowed to go unchallenged in public discourse,” said CAIR Deputy Director Edward Ahmed Mitchell. “We applaud the Burlington school board for its response to conspiratorial Islamophobic rhetoric and public health misinformation, and urge all institutions across our nation to do their part to challenged bigotry and conspiracy theories.”

Mitchell said the American Muslim community and CAIR stand in solidarity with all those challenging anti-Black racism, xenophobia, Islamophobia, anti-Semitism, white supremacy, and all other forms of bigotry.

Video: CAIR Calls on DHS to Release Quran Tiles for Va. Mosque That are Threatened with Destruction