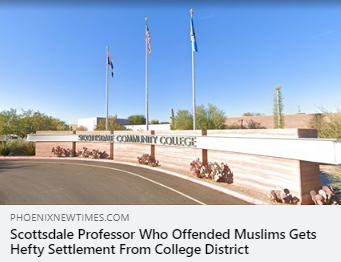 (PHOENIX, AZ, 4/14/2021) – The Arizona chapter of the Council on American-Islamic Relations (CAIR-AZ), RM Warner Law PLC and Price Law Group APC today condemned the Maricopa County Community College District (MCCCD) for paying a $155,000 settlement to an anti-Muslim professor Nicholas Damask, who used his classroom to make false claims about Islam and forced students to denigrate the religion in order to receive a positive grade.

SEE: The Maricopa County Community College District has agreed to pay $155,000 in a settlement to a Scottsdale professor whose quiz questions about terrorism offended Muslims.

“We are appalled the decision of the Maricopa County Community College District, which shows that Islamophobia is still one of the last publicly acceptable forms of bigotry in our nation,” said CAIR-Arizona Executive Director Azza Abuseif. “This act has devastating, real impacts on real people – our friends, family and neighbors of the Muslim faith. We must publicly condemn Islamophobia of rewarding public school teachers who violate the Constitution by forcing their students to condemn a religion.”

“Rather than standup for the equitable and just treatment of its Muslim students and stakeholders, MCCCD capitulated to threats by a xenophobic professor and used taxpayer dollars to enrich this man to the tune of $155,000.00,” said David Chami, a partner at Price Law Groups. “Worse yet, the District has openly defended the use of the patently false and xenophobic material in the classroom now and into the future.”

CAIR-AZ and Price Law Groups are currently suing MCCCD and the teacher in the United States Ninth Circuit Court of Appeals for violating the Establishment Clause and Free Exercise Clause of the First Amendment.

“Maricopa County may not care that Professor Damask makes false claims about Islam and forces Muslim students to condemn their own religion, but the law does care. We remain committed to advancing our lawsuit against this professor and the school as long as they continue to violate the First Amendment of the Constitution,” said CAIR-Arizona Civil Rights Director Ahmed Soussi.

FOR BACKGROUND, SEE: CAIR-AZ Joins 100+ Groups, Leaders and Activists Calling on Maricopa County Community College District to Get Hate Out of the Classroom