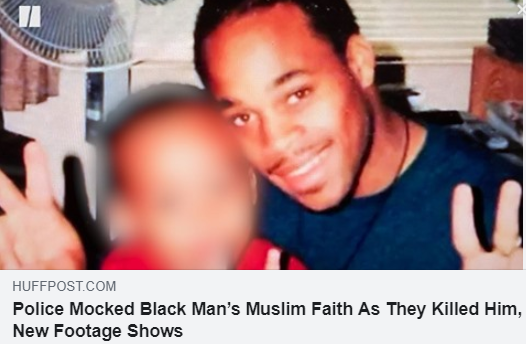 Video shows officer saying, ‘Allah? He’s not going to help you right now,’ as Muhammad Muhaymin Jr. was being pinned down with knee on his neck

(PHOENIX, AZ, 8/21/2020) – The Council on American-Islamic Relations (CAIR) and its Arizona chapter (CAIR-Arizona) today demanded a transparent and independent criminal investigation and the firing of officers involved in the 2017 killing of Muhammad Muhaymin Jr., a Black Muslim man.

Newly-revealed body camera video shows 43-year-old Muhaymin pinned down by Phoenix police officers, with one officer putting his knee on Muhaymin’s neck in a manner similar to the killing of George Floyd in Minneapolis, Minn.

In the video, Muhaymin can be heard saying “I can’t breathe” many times. “Please, Allah,” Muhaymin says in the video. “Allah? He’s not going to help you right now,” one of the officers responds. An officer off camera is heard saying: “I don’t feel a pulse.” Another officer responds, “Oh, he’s dead,” before turning off his camera.

None of the officers involved in Muhaymin’s death have ever been arrested or charged. All are still employed by the Phoenix Police Department.

“It is clear from this horrifying video that criminal charges must be brought against those involved in the killing of Muhammad Muhaymin Jr.,” said CAIR-AZ Executive Director Imraan Siddiqi. “The disturbing similarity of this case to the killing of George Floyd is yet another tragic example of why systemic reform is needed throughout police departments nationwide.”

“The only thing more disturbing than footage of police officers mocking and murdering a mentally ill man is the fact that these officers have not been fired or charged in the three years since this horrific incident happened,” said CAIR National Deputy Director Edward Ahmed Mitchell. “It is not too late to pursue justice for Mr. Muhaymin and his loved ones. The City of Phoenix should fire the officers involved and arrange for an independent criminal investigation into the officers.”

Mitchell said Washington, D.C.-based CAIR and the American Muslim community are standing in solidarity with all those challenging anti-Black racism, Islamophobia, anti-Semitism, and white supremacy.

CAIR-Arizona is a chapter of America’s largest Muslim civil rights and advocacy organization. Its mission is to protect civil rights, enhance understanding of Islam, promote justice, and empower American Muslims.