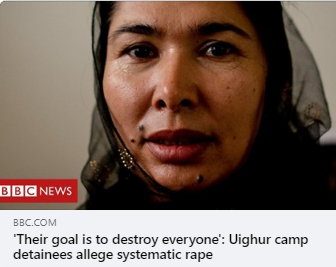 SEE: ‘Their goal is to destroy everyone’: Uighur Camp Detainees Allege Systematic Rape

Last month, CAIR welcomed the Trump Administration’s decision to declare China’s actions against Uyghurs Muslims a “genocide,” which the Biden Administration is currently reviewing. The United States was the first country to adopt these terms to describe the Chinese government’s human rights abuses in Xinjiang.

CAIR is urging the Biden administration to quickly resolve any procedural errors in the Trump administration’s recognition of the genocide, and to go further by recognizing the BBC reports as evidence of genocidal rape.

“Given this new evidence of systemic rape and sexual abuse against Uyghur women in Chinese concentration camps, it is incumbent upon the Biden administration and the international community to take immediate and concrete action to stop this ongoing crime against humanity.

“Muslim-majority nations also have a special responsibility to speak out against China’s genocidal campaign to eradicate Islam and Muslims from the region. All members of the Organization of Islamic Cooperation must unite to put political and economic pressure on China until it changes course.

“Nations around the world declared ‘never again’ on the recent anniversary marking International Holocaust Remembrance Day. Now is the time to make that slogan a reality in China.”

CAIR recently joined the US Council of Muslim Organizations (USCMO), Free Uyghur Now, and other global allies in a virtual press conference calling on the Organization of Islamic Cooperation (OIC) to join the international community in standing with Uyghur Muslims and other Turkic ethnic minorities.