CAIR Calls on Biden Administration to Do More to ‘Undo the Damage’ Caused by Muslim, Africa Bans 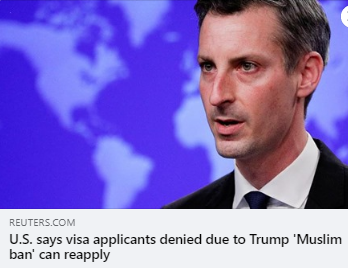 (WASHINGTON, DC – 3/9/2021) — The Council on American-Islamic Relations (CAIR), the nation’s largest Muslim civil rights and advocacy organization, today called on the U.S Department of State to do more to “undo the damage” caused by the Muslim Ban by waiving fees and fast-tracking applications for all immigrants who were unjustly denied visas due to their nationalities.

On Monday, the State Department announced the results of its 45-day review of immigration processes, which was mandated by an executive order President Biden signed repealing the Muslim Ban on Jan. 20, 2021.

The department’s announcement also states, “Applicants from the affected countries may no longer be denied on the basis of nationality, and the Department has taken a number of steps to ensure that applicants previously refused visas under Proclamations 9645 and 9983 will not have future visa applications prejudiced in any way by those prior decisions.”

“Although we welcome the Biden administration’s affirmation that that Muslim and Africa Bans were bigoted, discriminatory and unacceptable policies, the administration must do more to undo the damage these policies caused to thousands of students, workers and families — both here and abroad.

“‘Start over’ is not a solution. The thousands of immigrants whose visa applications were unjustly denied because of the Muslim Ban should receive both fast-tracked reconsideration and a waiver of the application fees they have already paid. We ask the Biden administration to be creative and work with community-based groups to bring relief to all the families that were separated and harmed because of the discriminatory and xenophobic bans.

“We also call on the State Department to do more for Diversity Visa application winners who were not issued visas due to the Muslim and African Bans. The Biden-Harris administration must work with Congress to find alternative immigration pathways for these would-be immigrants who are being denied a chance at the American dream.

SEE: CAIR Community Advisory: What You Need to Know About the Muslim Ban Repeal