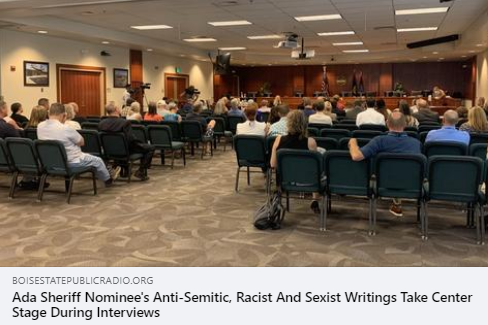 (WASHINGTON D.C., 7/2/2021) – The Council on American-Islamic Relations (CAIR), the nation’s largest Muslim civil rights and advocacy organization, today called on the Ada County Commission in Idaho to drop a sheriff nominee who has expressed Islamophobic, anti-Semitic, racist, and sexist views.

Ada sheriff interviews: Comments about Jews, talk of a ‘cabal’ and news of a ‘succession’ plan

Nominee Doug Traubel’s inflammatory social media posts and book, in which he claims Marxist values have eroded America, were discussed at length during his hour-long interview with the Ada County Commission Wednesday.

The Idaho Statesman reported: “Commissioner Kendra Kenyon, of District 3, questioned Traubel about posts he has written about the number of Black men who rape white women; his support for the ‘constitutional’ sheriff movement; and comments that he wears a mask with ‘hoax’ written on it when traveling on airplanes, that ‘Islam is the culture of death’ and that single mothers are ‘not an economically viable unit.’”

In his book, Traubel claimed that 50 percent of rape allegations are false, a claim that he was unable to back up with any statistics. He also expressed the belief that the Western world lost the Second World War and blamed the Jews for the rise of Nazism.

Although Traubel has claimed his beliefs would not affect his job performance, he said he would not enforce federal laws he felt were unconstitutional, such as restrictions on gun ownership.

“Law enforcement authorities have a duty to protect the community regardless of the background of those they serve,” said CAIR National Communications Director Ibrahim Hooper. “Anyone who holds bigoted views should be excluded from consideration as a public official who must administer the law without bias of any kind.”

He noted that CAIR has previously condemned racist actions and statements by law enforcement officials.

SEE: CAIR-Cleveland Calls for Retraining for Sheffield Lake Police Department after Chief Allowed to Resign in Wake of Racist Incident

Hooper said that the American Muslim community and CAIR stand in solidarity with all those challenging anti-Black racism, xenophobia, Islamophobia, anti-Semitism, white supremacy, and all other forms of bigotry.